Transports Metropolitans de Barcelona (TMB) is displaying the occupancy level of trains arriving at three stations on line five of the Barcelona metro, following the installation of new screens on platforms that receive information from load sensors installed on the trains.

This is a pilot test of transport scanning that aims to benefit metro users by providing real-time relevant information.

The information is transmitted to the platforms so that users can know the actual position of the train arriving, as well as the level of occupancy of each car, on a scale of one to four.

This aims to allow users to decide where to stand on the platform to board the least busy part of the train, or whether the best option is to wait for a second train. 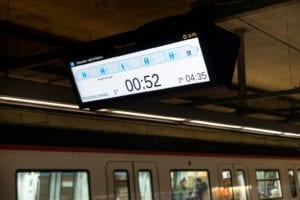 TMB said it aims for this feature to offer more comfortable journeys, as well as allow better operation, which should optimise the occupancy of trains.

The pilot test is to be carried out at three stations on L5 of the Barcelona metro (Cornellà Center – Vall d’Hebron), because it is considered one of the most popular lines of the metro network.

All three stations were chosen from those of medium to high affluence. In two of the stations (Sants Estació and Hospital Clínic), the screens have been added to existing systems, whereas screens in the third station (Entença) have been replaced.

All new screens are 37 inches long and text appears in Catalan, Spanish and English. The test is carried out by means of an external contract and the system will be studied to decide whether to extend it to other stations on the network.

Want to learn more about technologies enabling the clean, safe and efficient movement of people through cities? CiTTi Exhibition takes place on the 3rd and 4th of June at Coventry’s Ricoh Arena. Register your interest to attend at www.cittiexhibition.co.uk