Bristol is set to become the UK’s first city to ban diesel cars from entering parts of the city centre in a bid to cut air pollution. The scheme, which needs government approval, is due to start in 2021.

Bristol City Council has agreed to ban privately owned diesel cars from a central zone, which includes part of the M32, the old city, Redcliffe, Spike Island, the Harbourside, and part of Hotwells, between 7am and 3pm. Vehicles, with the exception of taxis and emergency services, will incur fines if they enter the area.

A wider clean air zone (CAZ) extends further away from the city centre, which private diesel cars will not be charged to enter.

Diesel-powered commercial vehicles such as lorries, vans, buses and taxis, which pay to enter the wider CAZ, will be allowed in the central zone. However, taxis and vans will pay a daily charge of £9 and buses and HGVs £100. 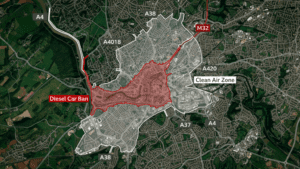 The scheme will be enforced by ANPR technology, a number plate recognition system similar to the one used to police London’s congestion charge zone.

Bristol City Council has agreed a business proposal for the idea, however details of specifics such as how much fines will be, and which categories of vehicles and people might be exempt from the ban, have yet to be decided.

The council is under a legal obligation to reduce air pollution in the city by lowering NO2 levels to within legal limits as soon as possible due to twice missing UK government deadlines for providing details of a CAZ.

It is hoped this new plan will enable it to achieve clean air compliance by 2025.