Transport for London (TfL) will introduce lower speed limits across 8.9km (5.5 miles) of central London roads in a move to reduce deaths and serious injury throughout the capital, starting on Monday 2 March.

The new 20mph speed limits will be enforced across all TfL roads within the Congestion Charging Zone following strong public support for the proposals.

The 20mph speed limits are supported by new signage and road markings, with raised pedestrian crossings being installed in prominent locations where a high number of people walk.

TfL will also recalibrate all speed cameras in central London and will work with the Metropolitan Police to ensure that drivers comply with the new speed limits.

From April, a new speed enforcement team will identify speeding drivers across the capital, including within the new 20mph speed limits.

The team will be deployed to known high-risk locations for speeding and will respond to stakeholder and community concerns about drivers speeding in their area, equipped with the latest laser video speed enforcement technology.

Lilli Matson, chief health, safety and environment officer at TfL, said: “Millions of walking and cycling journeys are made across our city every single day and a person is five times less likely to be fatally injured if hit at 20mph than at 30mph – it’s as straightforward as that.

“It’s clear the new 20mph speed limits will not only save lives but will also encourage Londoners to travel in more active and sustainable ways.” 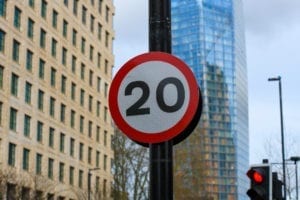 Reduced speed limits will be in force across 8.9km (5.5 miles) of London roads within the Congestion Charging Zone from 2 March 2020

The changes mirror the lower speed limits already in place across other borough roads in central London.

Last year’s consultation drew nearly 2,000 responses from the public, with half of respondents saying that a 20mph speed limit would have a positive impact on walking.

TfL said it will work with boroughs and the public to introduce lower speed limits more widely across the capital over the next five years.

It aims to introduce safer speed limits across a further 140km (87 miles) of its road network, focusing on high-risk sections of road, town centres where people walk and cycle, and streets neighbouring local speed reduction programmes led by London boroughs.

According to TfL, speed is a factor in around 37% of collisions in London where a person dies or is seriously injured.

A further 2,256 people were reported as seriously injured in collisions where speed was recorded as a contributory factor.

Achieving lower speeds in the UK capital forms part of TfL’s Vision Zero commitment to eliminate deaths and serious injuries from the transport network by 2041.

Want to learn more about the products and services enabling the clean, safe and efficient movement of people and goods through cities? CiTTi Exhibition 2020 takes place on the 3rd and 4th of June at Coventry’s Ricoh Arena. Register your interest to attend at www.cittiexhibition.co.uk