Due to go into service in 2020, Black Swan can carry up to eight passengers and uses lithium-ion batteries previously used in Renault ZE vehicles. 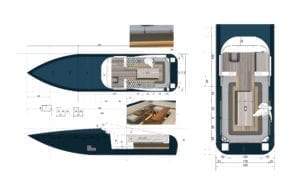 After being reconditioned these cells now power a pair of 20kW electric motors that allow two hours cruising on the River Seine in Paris, while full charge takes 2-3 hours.

The batteries and motors together weigh 278kg (613 lb), which is less than the combined total of the original fuel tank and engines.