The trial, which was supported by a £4.7m grant from the UK government-funded Advanced Propulsion Centre, consisted of 20 Ford Transit Custom Plug-In Hybrid vans covering 150,000 miles over a 12-month period.

The trial sought to test whether businesses could carry out the typical daily duties of their diesel-powered vehicles while in zero-emissions electric-only mode.

During the trial, 75% of the fleet’s mileage in Central London and 49% in Greater London was completed using pure electric power, highlighting the hybrid vans’ ability to reduce tailpipe emissions in the inner city, while using a petrol range-extender to complete longer journeys when required.

According to Ford, commercial vehicles in London make 280,000 journeys on a typical weekday, travelling a total of eight million miles. Furthermore, vans represent 75% of peak freight traffic, with more than 7,000 vehicles per hour driving at peak times in Central London alone. 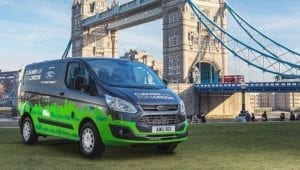 “Emissions-free mobility is essential for the future of cities and their citizens, but we know there are still barriers we face in the move to electrification,” said Mark Harvey, director of Ford’s Urban Electrified Van programme.

“We also know that businesses still have legitimate concerns about the range of fully-electric vehicles, as well as their cost-effectiveness and reliability.

“These trials have helped Ford and its customers to investigate the extent to which PHEVs can help to achieve urban air quality goals, whilst not compromising on productivity.”

Ford says it has incorporated learnings from the trial of prototype vehicles to optimise the Transit Custom Plug-In Hybrid production model that will go on sale to customers at the end of 2019.

“This trial is the first time Ford has given such early prototype vehicles to customers, and we’ve been able to incorporate their feedback directly into the production van,” Harvey added.

Ford recently announced that a new all-electric Ford Transit will join the company’s European line-up of electrified commercial vehicles in 2021.