Originally launched by both companies in Madrid in 2017, Zity will commence operation in the French capital from March 2020, with a fleet of 500 all-electric Renault Zoe cars made available to Parisians on a self-service basis via a free mobile app.

According to Renault, the scheme is being launched in Paris in response to the fact that 20% of the city’s inhabitants currently use car-sharing services.

Gilles Normand, SVP, electric vehicles and mobility services, Groupe Renault, said: “The Zity electric car-sharing service in free-floating offer has many advantages, including flexible booking times and the availability of vehicles, in the right place at the right time, thanks to a high-performance application. 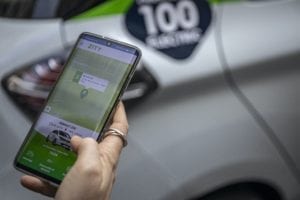 In March, 500 Renault Zoes will be distributed throughout Paris, available for hire 24 hours a day, seven days a week

“With a cleaner, accessible and sustainable mobility offer, Zity also provides a response to the needs of cities to reduce CO2 emissions and to combat pollution.”

Using the Zity app, customers can view which Renault Zoe is closest to their position and reserve the car instantly.

When they get to the car, it can be unlocked via the app.

To end the rental, the vehicle must be parked in Paris, on any public sparking space above ground and locked. The operation reportedly takes a few seconds.

All 500 Renault Zoes have five seats and are equipped with a reversing camera and parking sensors, GPS, touch-screen infotainment system and cruise control.

Child seats are available in some of the vehicles and those equipped with them can be identified via the mobile application.

A ‘stand-by” option also makes it possible to keep the vehicle when the driver needs to park for a short time without incurring extra costs.

What’s more, the technology on board the vehicle enables all information on the dashboard, including the battery level, to be displayed in real time.

If the battery falls below the minimum level required, the vehicle is no longer available for hire and is taken by Zity to recharge it. 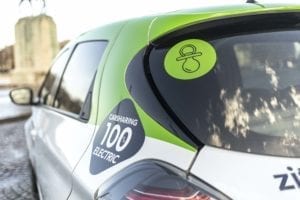 If the battery falls below the minimum level required, the vehicle is no longer available for hire and is taken by Zity to recharge it

As well as offering freedom of movement within and outside the inner Paris area and Clichy, the autonomy of the Zoe batteries should result in less frequent recharging and more vehicles available on the streets.

In addition, a computer platform and algorithm constantly analyses vehicle use, which means Zity can identify areas where car-sharing demand is highest and can reposition vehicles in the city after servicing, so that users can find a vehicle.

The next steps in the development of the partnership between Renault and Ferrovial are subject to authorisation from the European Commission in the area of merger control.

Renault said that the service could be extended to other cities in the coming years.

Want to learn more about how car-sharing services are enabling the safe, clean and efficient movement of people through cities? CiTTi Exhibition takes place on the 3rd and 4th of June at Coventry’s Ricoh Arena. Register your interest to attend at www.cittiexhibition.co.uk