Coventry City Council will not introduce a clean air zone (CAZ) after confirming that the UK government has backed its alternative emissions reduction proposals.

The decision means Coventry does not require a Class D charging CAZ, which would have seen higher emission vehicles charged for entering a large area of the city.

Instead, it has been awarded grant funding of £24.5m to implement a series of measures to reduce nitrogen dioxide emissions.

The council said it has worked closely with the government’s Joint Air Quality Unit since June 2019 and that the council’s position has consistently argued against a CAZ. 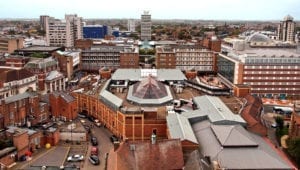 Coventry has been awarded grant funding of £24.5m to implement its alternative emissions reduction schemes.

Cllr Jim O’Boyle said: “This is excellent news and means any CAZ that would have been imposed – affecting 82,000 residents or 25% of our residents – has been stopped.

“A CAZ in Coventry would have potentially created worse air quality on many residential roads bordering the charging zone as drivers would have sought alternative routes to avoid the CAZ.”

The legal direction from the government means that Coventry will need to submit a final full business case by 19 June, which will feature more details on the schemes now due to get underway.

Coventry City Council said it will continue to consult with local people over the coming weeks about the plans being identified, which include:

– Capacity improvements on the B4106 through Spon End and Junction 7 of the Ring Road, including improved routes for pedestrians and cyclists;

– Opening Upper Hill Street onto the Ring Road, giving left in/left out access to the Ring Road via the clockwise on-slip road at Junction 8 and allowing Barras Lane to be closed;

– Reducing the number of polluting vehicles by introducing restrictions on the eastern section of the A4114 Holyhead Road on the approach to Junction 8;

– Construction of a segregated cycle route linking Coundon with the city centre along Coundon Road and Upper Hill Street;

– Banning the right turn from Cash’s Lane onto Foleshill Road

Cllr O’Boyle added: “We know the health risks of Nitrogen Dioxide and that is why we want to address this through a package of measures including: highways engineering; improved traffic management; cycle routes; travel planning; upgrading bus fleet; supporting a shift to electric taxis; and encouraging the uptake of electric cars and installing more charging points.

Want to learn more clean air initiatives and emission reduction projects in cities? CiTTi Exhibition takes place on the 3rd and 4th of June at Coventry’s Ricoh Arena. Register your interest to attend at www.cittiexhibition.co.uk