Natalie Chapman, head of south of England and urban policy at the Freight Transport Association (FTA), questions whether the Direct Vision Standard for heavy goods vehicles (HGVs), which comes into force in October 2020, is enough to end deaths and serious injuries on the capital’s roads by 2041.

While FTA does not believe that DVS is the best way to improve road safety, it has worked closely with Transport for London (TfL) throughout its development and encouragingly, many of its recommendations have been implemented within the scheme. For example, TfL developed the Safe System as an alternative route to compliance, following FTA’s calls to recognise the investment companies have already made in safety equipment.

As a result, HGVs with comprehensive safety systems – in addition to those rated one-star or above – will be able to operate in London after the scheme comes into force. TfL will be continually monitoring and reviewing this scheme and will consult with FTA before imposing stricter requirements, scheduled to be enforced from 2024.

Under the initiative, HGVs will be categorised and rated depending on the level of a driver’s direct vision from a cab. Affecting all goods vehicles over 12 tonnes operating in London, DVS was developed with the intention of improving safety on London’s roads by eliminating blind spots on HGVs. Initial estimates show that around two thirds of HGVs, over 12 tonnes currently on the road, would not meet the minimum one-star DVS rating in October 2020, and would effectively be banned from all of London’s roads.

Technological innovation
According to FTA, technological innovation is vital to achieving the Mayor of London Sadiq Khan’s vision of ending deaths and serious injuries on the capital’s roads by 2041. Technical solutions, such as in-cab cameras and warning systems, can provide drivers with a view that cannot be replicated by direct vision. Significant investment in the fitment of cameras, sensors and audible alarms has already contributed to a nearly 21% reduction of cyclist fatalities involving HGVs between 2009 and 2015.

And, with technology continually evolving, these systems will become increasingly advanced – unlike the benefits of direct vision, which will remain fixed and limited – and it is likely that by 2024, when the second stage is due to be implemented, these technological advances will surpass the need for improved direct vision. 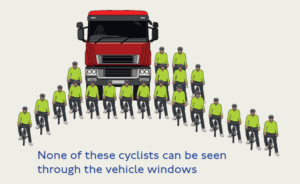 Diagram showing the blind spots from HGVs, which the Direct Vision Standard addresses

Smart road design
Urban areas are becoming increasingly populated with shared spaces between pedestrians, cyclists and vehicles causing higher levels of interaction. Drivers need access to the kerbside when carrying out deliveries and whilst the introduction of segregated cycle routes has proved socially and environmentally beneficial, the logistics sector must also be considered as part of smart road design.

Retiming deliveries
Whilst some deliveries are time sensitive, it is FTA’s opinion that retiming deliveries to quieter periods wherever possible, and therefore removing lorries from the roads at peak times, will prove beneficial to improving both road safety and air quality.

There are, however, many local restrictions on overnight deliveries and in London, this includes the outdated London Lorry Control Scheme. Introduced in 1986 and currently under review, the scheme restricts the movement of goods vehicles over 18 tonnes both at night, and at weekends. FTA advocates that if commercial vehicle drivers are to use the roads during sensitive hours, they must do so responsibly. To help achieve this, FTA has been working with the Noise Abatement Society to promote the use of quiet technology and working practices.

Whilst it is encouraging that the Mayor of London is reviewing safety as a serious concern, it is FTA’s opinion that safety affects all road users, not just HGVs, and the responsibility of zero vehicular harm should lie with the community as a whole. FTA has been clear about its approach and has called upon the Mayor to take into consideration the wider potential dangers on the capital’s roads, as well as looking further afield for the solutions.