Proterra, a developer of heavy-duty EVs, has announced that Miami-Dade has agreed to purchase 33 Proterra Catalyst E2 electric buses with DuoPower drivetrain technology and up to 75 plug-in Proterra chargers.

Miami-Dade mayor Carlos Giménez said: “Deploying battery-electric buses is one of the best actions we can take to improve our environment and our community’s public health. We are looking forward to working with Proterra to deliver clean, quiet transportation to Miami-Dade.”

To further Giménez’s objectives, Miami has made a commitment to reduce fossil fuel consumption with at least 50% of the county’s buses being electrically powered by 2035. 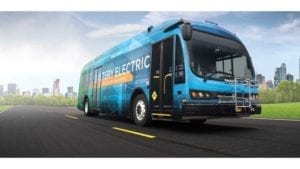 With zero tailpipe emissions or pollutants, Proterra battery-electric buses eliminate about 230,000 lb (104,000kg) of CO2 emissions annually for every diesel vehicle replaced by a zero-emission bus.

In addition to environmental benefits, the 40ft (12m) Proterra Catalyst vehicle offers nearly twice the horsepower of a standard diesel bus and five times better fuel efficiency. It also has the longest range of any battery-electric bus in its class.