Nottingham City Council and bike manufacturer Raleigh will produce 15 e-cargo cycles after the authority was successful in bidding to the Energy Saving Trust for nearly £50,000 of government funding.

The 12 two-wheeled bikes and three trikes are designed to allow individuals and companies to transport bulkier items between locations.

They have a large compartment at the front and are powered by an electric motor. 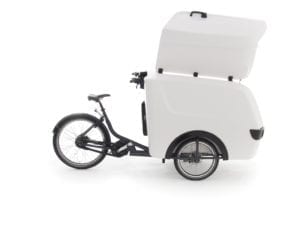 – Nottingham City Council’s internal fleet: These will be used by the authority to replace journeys around the city and in parks currently done by petrol or diesel vehicles.

– Local project delivery partners: Later this year the bikes will be made available to local partners such as Sustrans, Nottingham Bikeworks, Ridewise and the city’s two universities.

– Local businesses via the Workplace Travel Service: These bikes will be allocated for an initial free, try-before-you-buy basis for up to three months. After this period, options to retain the cycles in the long-term will be available.

According to the council, the project opens up access to a commercial vehicle option that is currently out of reach for both private and public-sector organisations.

It could be of particular benefit to smaller organisations who may currently rely on external providers for deliveries within the city.

Through an extended trial period, organisations will be able to assess – with support from the council’s Workplace Travel Service – if an e-cargo bike can benefit them financially over a set period.

The £47,900 grant has come from a wider £2m eCargo Bike Grant Fund scheme funded by the Department for Transport and delivered by the Energy Saving Trust.

“The ultimate aim of the project will be to visibly establish eCargo cycles the city as a cost-effective and efficient transport option.

“They are an excellent way for people to move freight around quickly and environmentally. We look forward to adding some to our own fleet for council officers to use.”

In time, the council said it hopes to make e-cargo bikes available at local mobility hubs across Nottingham – as part of the city being chosen as one of four trial Future Transport Zones in England.