The Port of Oslo has announced plans to make an 85% reduction it its emission of carbon dioxide, sulphur oxide, nitrogen oxide, and particulate matter by 2030, ahead of achieving its ultimate aim of becoming the world’s first zero-emission port.

The Norwegian port receives between 50 and 70 vessel calls a week and 12,500 containers a month, while ships and shore equipment help produce 55,000 tonnes of greenhouse-gas (GHG) emissions per year.

Thus, the Port of Oslo has a 17-point climate action plan that includes refitting ferry boats, implementing a low-carbon contracting process, and installing shore power, which would allow boats to switch off their engines and plug into the grid when docked.

The effort is part of the city’s mandate to cut overall emissions by 95% by 2030.

“It’s very ambitious, but at the same time it’s what is necessary if we are going to reach the Paris Agreement,” said Heidi Neilson, head of environment for the Port of Oslo.

According to the International Maritime Organization, between 80-90% of the world’s trade by volume is transported by sea on high-sulphur fuel oil – equivalent to 94,000 vessels carrying 10 billion tonnes of crude, chemicals, corn, and cargo, at a cost of US$4tn a year and nearly 4% of global GHG emissions.

In Oslo, ferries operating from the port to Denmark and Germany are responsible for nearly 40% of its emissions output, while local ferries account for 12% and onshore handling and transport equipment accounts for 14%. 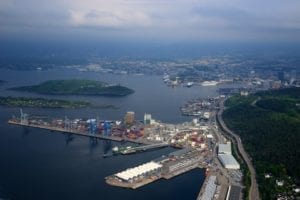 To help address local ferry emissions, the port has awarded a contract to operator Norled to electrify three of 10 existing passenger ships. When all three ferries are outfitted with batteries, Norled estimates the transit authority’s port emissions will decline by 70%.

Furthermore, in August, the port signed a contract with Norwegian NGO Bellona Foundation to help expedite its emissions reduction plan.

According to Bellona Foundation’s maritime senior advisor Christina Ianssen, shore power is one way of enabling maritime decarbonisation that can be implemented now.

“It would enable refitted ships to keep their lights, cooling systems, and other systems and equipment on by plugging in to the hydroelectric grid rather than running the engine,” said Ianssen.

“It would also power equipment such as cranes, which usually run on diesel.

“And even though shore power doesn’t solve all our problems, it helps push for a shift that is technically feasible today.”