The system is designed to help drivers detect moving or stationary objects in the monitoring zone along the nearside of the truck, such as pedestrians, cyclists, road signs and e-scooters.

In such a situation, the driver will initially be informed of their presence using visual means. 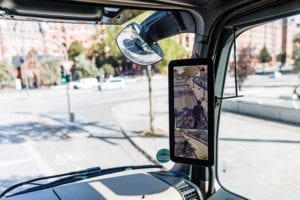 What’s more, the number of serious accidents involving personal injury during nearside manoeuvres could be reduced by nearly 40% and related fatalities by nearly a third.

According to Mercedes-Benz Trucks, Sideguard Assist is the only assistance system of its kind available on the truck market to be fully integrated into the vehicle architecture and can be retrofitted in numerous ex-factory Actros and Arocs model variants.

Furthermore, the system works for both rigid vehicles and entire vehicle combinations up to 18.75m (61.5ft) in length.