ABB with Keppel O&M’s technology arm, Keppel Marine and Deepwater Technology (KMDTech), will together develop the technology for autonomous vessels and retrofit a 32m (105ft) harbour tugboat with leading-edge digital solutions, enabling autonomous vessel operations in the Port of Singapore at the end of 2020. The vessel is due to be in South Asia’s first autonomous tug.

During the beginning of the project, the vessel, operated by Keppel Offshore & Marine’s joint venture company Keppel Smit Towage, will do a number of navigational tasks in a designated test area in the Port of Singapore, run from an onshore control centre. The second phase of the project will see the vessel perform autonomous collision avoidance tasks while under remote supervision.

“This project is a key marker on our digital journey as it demonstrates our capabilities as a leader in intelligent shipping technology and proves the success of our electric, digital and connected vision for the maritime industry,” said Juha Koskela, managing director, ABB Marine & Ports. “The intent of our technology is not to entirely remove the crew, but rather to relieve the crew from the tasks than can be automated and thus enable them to perform at their best during critical operations.” 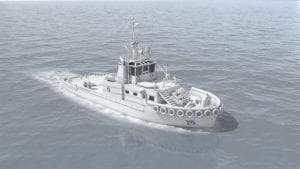 Tugboat enabling autonomous vessel operations in the Port of Singapore

The Port of Singapore sees over 130,000 vessels annually, has exponentially denser shipping patterns, which will add another layer of complexity to the trials. The trials look to confirm the increased safety and efficiency of tug operations by utilising digital solutions that are already available today for almost any type of vessel. ABB Ability Marine Pilot portfolio of solutions are integral to the trials, which allow the ‘sense-decide-act’ loop required for any form of autonomy. ABB Ability Marine Pilot Vision will provide the sensor fusion from existing and new systems to generate a digital situational awareness while ABB Ability Marine Pilot Control will deliver the necessary conning commands.

Tug operations can be demanding. Also, sometimes the tugs must do long transits to get to their desired place. Doing the transit independently and under remote supervision would allow the onboard crew to rest and be alert when they are needed in the actual work of the tug.

Doing this project, ABB tasks a further step towards autonomous shipping, building on the insights gained from the groundbreaking trial of a remotely operated passenger ferry Suomenlinna II, performed in Helsinki harbour in November 2018.

KMDTech will work with the Maritime Port Authority of Singapore (MPA) and the Technology Centre for Offshore and Marine, Singapore (TCOMS) to develop various technologies and be the system integrator for the autonomous solutions. American Bureau of Shipping (ABS) will provide the Approval in Principle for the novel features like Remote Navigation Control and Autonomous Control System.