Restore plc is expecting savings of almost £45,000 as a result of making its fleet cleaner in line with the introduction of the London Ultra-Low Emission Zone (ULEZ).

Restore worked with vehicle supplier Days Fleet to future-proof 40 light commercial vehicles and four 7.5 tonne trucks that travel in and out of the ULEZ on a daily basis. This was done in two phases. 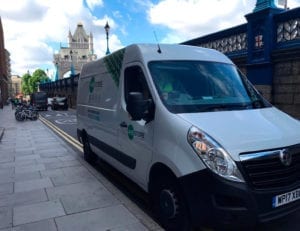 Phase one identified 15-20 which needed replacing and new Euro 6 compliant vans were all delivered to London depots.  Non-ULEZ compliant Euro 5 vehicles were relocated from those sites to locations outside the capital. And four new 7.5 tonne DAF trucks were leased to replace older vehicles.

Phase two entailed relocating Euro 6 vans already operating from depots outside of London, particularly in the south west of England, relocated to London sites and swapped with Euro 5 models.

“Ahead of introduction of the ULEZ we analysed the fleet and identified 40 vehicles that would be impacted as they operated in and out of eight of the company’s satellite depots around London and would be driven into the Zone daily,” said national fleet manager Mr Miles. “Logistically it was a major challenge because we did not want the switching of vehicles to impact on business operations and we wanted to avoid the cost of hiring vans temporarily.”

(The savings were calculated based on the remaining life of the vans operating in London had they not been not replaced with Euro 6 models and continued to be driven into the ULEZ five days a week.)