Based in north-west Baden-Wuerttemberg in the south-west of Germany, RSV has built an electric bus depot to charge the buses, which will run on the number 7 route in Reutlingen.

Mark Hogenmüller, MD of RSV, said: “As a public transport provider within the region, we want to take responsibility and have emission-free vehicles in operation.” 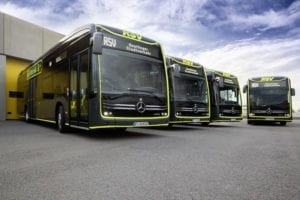 From December 2019, Reutlinger Stadtverkehrsgesellschaft (RSV) will be operating four new eCitaro buses on the number 7 E-line.

In order to be able to completely cover the daily public transport requirements on this line, the eCitaros receive intermediary charging during break times. The buses use the depot near the line’s final bus stop.

Herrmann Fröhlich, head of south-west sales region at Daimler Buses, said:” In creating a new, purpose-built depot, RSV is already putting in place what it needs to fulfil the requirements of purely electric public transport for tomorrow. In supplying the eCitaro, we also wish to contribute towards their success in this field.”

RSV, which has been testing electric-powered buses for eight years, has plans to run a four further eCitaros on its number 8 line.