The cloud-based system was created for a project led by SEAT, in collaboration with the Spanish Traffic Authority (DGT), Barcelona City Council and ETRA (Electronic Trafic).

The DGT 3.0 platform uses cellular technology with latency times of 300 milliseconds to connect vehicles with traffic lights and traffic control centres so drivers can anticipate their upcoming status.

The system performs a calculation based on how far away the car is and the speed it is travelling at. When a vehicle approaches a traffic light, an alert appears on the screen displaying whether it will be red, green or yellow when it arrives.

“The traffic light sends a signal to the traffic authority’s cloud about its current status and when it is going to change,” said Jordi Caus, head of urban mobility concepts at SEAT. 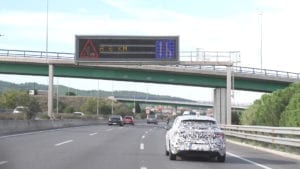 “The car receives this information, interprets it and alerts the driver of its upcoming status depending on driving speed.

“This is useful if it is about to change to red, as drivers can begin to decelerate before reaching the traffic light.”

The system also enables information on motorway incidents to be sent directly to vehicles without the need for information panels.

“We can accomplish the same as what we used to do with variable message signs on the motorway, but now directly to the car from any point on the road,” added Caus.

“The system does not work at higher speeds, which is very important for road safety,” said Manuel Valdés, head of mobility and infrastructure at Barcelona City Council. “It aims to be an auxiliary tool that enables motorists to drive more smoothly.”