All products, services and platform-based mobility solutions will be integrated in the new business unit – headed up by Lucas Casasnovas – including SEAT’s first electric e-scooter concept, which is set for market launch in 2020.

The product range is designed for private ownership as well as fleets and sharing services (on a per use basis).

Thus, SEAT Urban Mobility will collaborate with city and public administration representatives to analyse the suitability of a vehicle that has been engineered for urban mobility, such as the SEAT Minimó all-electric quadricycle concept.

It will also integrate the Respiro carsharing platform that currently operates in Madrid and recently launched in the city of L’Hospitalet de Llobregat. Respiro has a fleet of sustainable vehicles that run on compressed natural gas and will soon be joined by the new Mii electric.

The new business unit will also manage the kicksharing service offered by SEAT in partnership with startup company UFO, which will be enabled by SEAT:CODE, the company’s new software development centre.

SEAT president Luca de Meo said: “This strategic business unit will enable us to focus our efforts on the user’s new mobility needs. SEAT is the micro-mobility centre of competence for the Volkswagen Group, and that means developing purpose designed products for all the Group’s brands, not only for SEAT. In addition, we will also deliver services and solutions for private customers and for fleets.”

The e-scooter will be developed in partnership with Barcelona-based scooter maker Silence and built at its facilities in Molins de Rei, located halfway between Barcelona and Martorell.

The battery can be removed and charged at home or at public charging stations at an estimated cost of €0.70 (£0.60) per 100km (62 miles). In addition, the vehicle is connected and users can track its battery charge level or location via a mobile app. 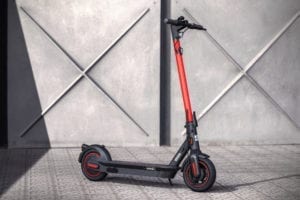 SEAT hopes that the new generation e-kickscooter will be as popular as the current eXS model, of which 10,000 units have been sold since 2018

The new generation e-kickscooter has a range of up to 65km (40 miles) and features two independent brake systems and a higher capacity 551Wh battery.

Also presented at the Smart City Expo World Congress was SEAT’s DGT 3.0 initiative, a pilot project in collaboration with the Spanish Traffic Authority that enables cars to communicate with traffic lights and motorway message panels in real time.

The main goal of the project is to improve traffic flows and road safety as well as the user experience while driving.