A survey of 1,000 commuters in London has revealed that 65.3% of respondents changed their usual mode of transport following the introduction of the Ultra Low Emission Zone (ULEZ) on 8 April 2019.

The report – titled ULEZ Survey 2020 – was commissioned by motorbike insurer Bikesure and carried out by independent market research agency, 3GEM Research and Insights.

As part of the survey, commuters in London were asked which combination of transportation modes and services they changed to after the ULEZ was introduced. 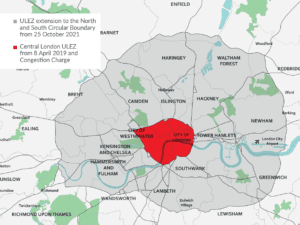 Some 30.9% of those surveyed said that they won’t be able to afford to drive/ride in London after the ULEZ is expanded in 2021

And when asked about the ULEZ expansion, in which it will expand to the North and South Circular roads in 2021, 30.9% said that they won’t be able to afford to drive/ride in London anymore; 35.1% said that it won’t make a difference to them; 25.3% said they will drive/ride in London less than they do now; and 12.8% will change to a low-emissions mode of transport.

Robert Balls, Bikesure business manager, said: “It’s quite telling that over 30% of people say they won’t be able to afford to drive or ride in London after the expansion.

London’s ULEZ: a blunt tool that can be made scalpel-sharp