Uber has recommenced testing of its autonomous vehicles in San Francisco on a limited basis, two years after it scaled down its test programme following a fatal crash in Arizona.

The cars will have two safety drivers each, with those employees having completed new training on safety awareness. 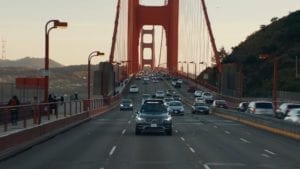 Tests will be limited to a few weeks while Uber updates its systems.

“We are excited to resume autonomous testing in Uber’s home city this week,” an Uber spokesperson said.

“Our testing area will be limited in scope to start, but we look forward to scaling up our efforts in the months ahead and learning from the difficult but informative road conditions that the Bay Area has to offer.”

The testing follows Uber recent return to the list of approved autonomous vehicle testers by the California Department of Motor Vehicles.

Uber suspended its autonomous vehicle testing operations in March 2018 after one of its cars killed a pedestrian crossing a street in Arizona.

It was reported that the vehicle was travelling at a speed of nearly 40mph (65km/h) in autonomous mode when it hit the victim, Elaine Herzberg, aged 49.

Want to learn more about issues, concepts and technologies that are changing the way in which people and goods move around urban environments safely, cleanly and efficiently? CiTTi Exhibition 2020 takes place on the 3rd and 4th of June at Coventry’s Ricoh Arena. Register your interest to attend at www.cittiexhibition.co.uk.