Zenzic, an organisation aiming to accelerate the development of AVs in the UK by uniting industry, government and academia, has claimed that emerging connected and automated mobility (CAM) technologies will start to eliminate the need for road signage from 2027.

Zenzic’s UK Connected and Automated Mobility Roadmap to 2030 reports that from as early as next year, new planning guidance and blueprints for CAM-ready cities, towns, highways and rural roads will look to accommodate CAM services for efficient operations.

This will see new highway schemes move away from so-called “high cost assets” (£10m per kilometre of smart motorway) in favour of digital infrastructure. In addition, the report states that improved vehicle connectivity will eventually eliminate the need for new road signage.

The decommissioning of signs and signals expected from 2027 will be the first visible indication that new road infrastructure has been deployed, followed by the widespread adoption of in-car signalling (using in-car technology to digitally display speed limits, highway exits, and traffic updates) in 2028.

“The job will not be complete by 2027, and of course there will be a significant number of vehicles which will still be digitally immature unless government intervenes and dictates – or assists in – retrofitting the appropriate kit,” said Daniel Ruiz, CEO of Zenzic.

The transition, development and widespread adoption of digital road infrastructure will be informed by new standards, following agreed models for the digitisation of sign assets, as well as the specification of new safety services. 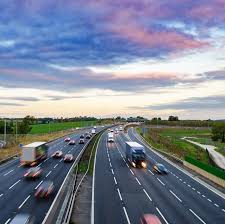 In the next 10 years, this will include identifying common approaches to safety and design standards and in the next five years describe the mapping requirements for digital road infrastructure.

According to Zenzic, having the infrastructure in place to facilitate the development and testing of self-driving technologies and services will be key to gaining insights that inform such standards and regulations, service design, and technology requirements.

It also believes that mature testing procedures and standards need to be in place in order to develop the infrastructure that will enable ‘naked highways’.

However, initiatives at sites part of Testbed UK will need to begin by 2025 in order for the wider CAM industry and UK government to agree on the test and validation methods and safety standards.

Roberto Ponticelli, senior consultant for connected and autonomous vehicles at Horiba MIRA, said: “In order to achieve the concept of a ‘naked highway’ the industry will need to move from component-based testing towards system-based testing; a paradigm shift affecting every level of the value chain in the road transport industry.

“A collaborative, integrated and coordinated approach to system design, testing, verification and validation that is orchestrated around scenarios meaningful to road users, mobility and infrastructure providers, local authorities, certification bodies and insurers, is at the core of this new paradigm.

“It will enable us to realise the promises of these new technologies and successfully implement the ‘naked highways’ concept, with all its benefits on traffic management and optimisation, cost of infrastructure, and the associated societal benefits.”