UPS has begun testing the suitability and durability of autonomous-enabled electric vehicles to move semi-trailers and containers at its package sorting and delivery facility in London.

During the initial phase of the test, UPS will operate the Gaussin vehicles – known as shifters – with drivers in the cabs to evaluate vehicle operations and the efficiencies they generate. 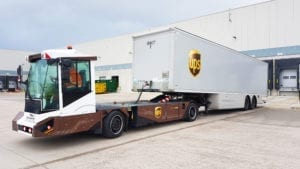 Later this year, UPS will progress to the next phase of operation, initiating autonomous driving operations.

“We’re also eager to test the shifters in autonomous driving mode. This is a great opportunity for us to evaluate technologies on our own property.”

Gaussin electric vehicles have zero tailpipe emissions and include novel battery-swap technology, which enables the shifters to be operated day and night, as the discharged battery pack is immediately replaced by a fully charged one.

Additionally, the vehicles will have numerous cameras, sensors and algorithms to improve safety.

Gaussin and UPS engineering teams have worked together since 2018 to co-develop a” versatile, upgradable and competitive electric shifter vehicle”.

The Gaussin shifter UPS is testing in London can move trailers, semi-trailers and containers in both manual and autonomous mode.

Want to learn more about issues, concepts and technologies that are changing the way in which people and goods move around urban environments safely, cleanly and efficiently? CiTTi Exhibition 2020 takes place on the 3rd and 4th of June at Coventry’s Ricoh Arena. Register your interest to attend at www.cittiexhibition.co.uk.