The new funds, which increase the total capital raised by Volocopter to €85m, will be used toward bringing the company’s VoloCity air taxis to commercial launch within the next three years.

“Urban mobility needs to evolve in the next few years to meet rising demand. With our Volocopter air taxis, we are adding a whole new level of mobility in the skies,” said Florian Reuter, CEO, Volocopter. “This funding round is allowing us to take great strides towards bringing urban air mobility to life whilst being respectful of our shareholder’s money.”

Following its investment, Geely, which owns Volvo Cars and Lotus, becomes a minority investor in Volocopter, alongside Daimler. Furthermore, the two companies have also agreed to enter into a joint venture to bring eVTOL to China. 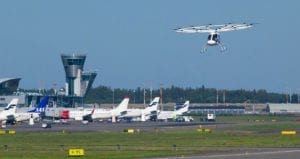 Li Shufu, chairman, Geely Holding, said: “Geely is transitioning from being an automotive manufacturer to a mobility technology group, investing in and developing a wide range of next-generation technologies.

“Our latest cooperation with Daimler, building on our partnership in smart and premium ride-hailing services, as well as our joint venture with Volocopter underlines our confidence in Volocopter air taxis as the next ambitious step in our wider expansion in both electrification and new mobility services.”

Volocopter anticipates another investment round toward the end of the year. It will put the funds toward receiving commercial certification by the European Aviation Safety Authority (EASA) for its VoloCity aircraft, which was created according to EASA specifications.

In August, the company successfully demonstrated the viability of eVTOL with a piloted flight at Helsinki International Airport. Since its foundation in 2011, the company has built three generations of Volocopter aircraft, two of which received licenses for manned and unmanned flight.