Radical thinking in Greater Manchester’s cycling and walking plan could direct cities away from car-focused infrastructure, believes Katja Leyendecker, a PhD candidate in architecture and built environment at Northumbria University.

The advantages of switching from cars to bikes in cities are well known – for health, urban air quality and the climate. Now, the “Change a region to change a nation” report, which outlines Greater Manchester’s walking and cycling plan, proposes a radical investment in cycling infrastructure.

The plan would see £1.5bn invested in the Bee Network, 1,800 miles of cycling and walking routes over the region. The goal is to create a model that could be replicated across the country. This network is something that even London, with all its cycling advances under the pro-bike (now former) mayor Boris Johnson and his cycling commissioner Andrew Gilligan, did not manage to accomplish in its time.

The Greater Manchester plan contains many, if not all, the vital elements necessary for a region to make real advances in transport politics. These are political resolve, reformed governance and open communication channels, a network plan and a budgeted work programme. The plan is rooted in a history of cycle campaigning that seeks to make travel by bike accessible for all, and – according to the plan’s authors – it has local backing. Above all, it offers a revolutionary alternative to a car-focused society. 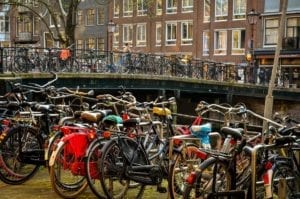 The plan is led by Greater Manchester mayor Andy Burnham and Chris Boardman, former professional cyclist and now Manchester’s cycling and walking commissioner. In the plan’s foreword, Boardman dives right into the heart of the matter: we must address our society’s dependency on cars, built into our cities by decades of urban planning. This is a brave step and very timely indeed, after decades of administrative inactivity on transport matters.

According to Boardman, discussions held in Manchester over the last year mean that the public are “now more aware than ever that the way we travel, using cars for even for the shortest of journeys, is one of the biggest contributors to the problem [of the climate crisis]”.

The economic case
The Greater Manchester network is priced at £1.5bn over 10 years. In a region of 2.8 million inhabitants, this equals a spend of about £50 per person per year. This is by no means outlandish. In the Netherlands, €30 (£25) per person per year is spent on cycling infrastructure alone.

The finances presented in the plan show a benefit-cost ratio (BCR) of 4. This means that every £1 invested is projected to return £4. The benefits consist of improvements in health and productivity such as increased physical activity, neighbourhood connectivity, boost to local business, congestion relief, and noise and air quality. The economic case is overwhelming.

A typical UK road scheme is classed as having “very high” value for money when it is calculated to yield a BCR of 4. In overall terms, a reliance on cars costs society dearly, while cycling has consistently shown to bring societal benefits at a typical BCR of 5.

The numbers add up. But here is the catch. All the benefits aside, where is the seed money supposed to come from for such a radical transformation? To invest in cycling and reap the rewards, Greater Manchester is appealing to the national coffers of the UK Treasury.

Rooted in activism
The foundation of the “Change a region to change a nation” report and the Bee Network is a new approach to campaigning for active travel.

In the past, cycling campaigners favoured on-road solutions: cycling mixed with motor traffic. From 2011 onwards, however, led by the London Cycling Campaign under environmental campaigner Ashok Sinha, cycling organisations began to concentrate on the arrangement of urban space as the main obstacle to everyday cycling.

A focus on urban space put cycling in direct and concrete conflict with a car-first society that single-mindedly prioritises motor vehicles’ use of city space. This conflict politicised cycling and put cycling firmly on the political agenda.

Road space must be given over to cycling if we want to construct cycling conditions where short journeys are habitually made by bike, where shopping by bike becomes a possibility, older people have stress-free and calm cycle environments for their free participation in public life, parents can cycle with children and children can cycle by themselves. This approach has a particular focus on journeys of care such as visiting friends and relatives, shopping and child minding, and many of these claims were made by women activists.

Looking at the names on the report, and wider cycling politics, it feels as if current culture still requires men to press through change. Thankfully, for one thing, the imagery used in the Greater Manchester plan is inclusive and diverse.

But there remains an ingrained car-first approach in national politics. For the Bee Network to fully succeed, regionally and UK-wide, that now needs to be challenged.