Mike Brown, director of industry collaboration and strategic partnerships at the University of Salford, explains why legislation, regulation, and insurance must all be addressed before real-world deployment of self-driving vehicles is achieved.

There are big rewards awaiting companies that can bring autonomous mobility to our roads: a report by US analysts Frost & Sullivan estimates the autonomous vehicle (AV) market could be worth over US$200bn (£165m) by 2030.

As a result, AV technology is developing at tremendous pace with a number of companies racking up thousands of miles of testing. Most of this testing is undertaken in modified/adapted vehicles; regular cars fitted-out with the relevant sensors, actuators, processing, etc. Progress is good and we’re fast approaching the point at where the technology will be ready for real-world deployment. 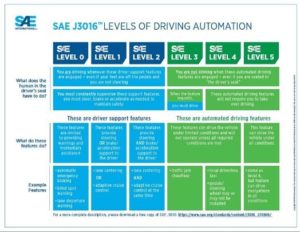 The six levels of driving automation are being explored by a number of companies in modified/adapted vehicles, rather than purpose-built AVs

Most people familiar with the six levels of autonomy believe that Level 3 is perhaps not a good or inherently safe option as it requires the driver to resume control of the vehicle at a moment’s notice. The safest step would be to look at Level 4 capable systems for real-world deployment. We may also have to wait a lot longer for true Level 5 to be achieved.

However, regardless of technology, there’s something much more difficult and complex that must be addressed before autonomous vehicles take to our roads, and that’s legislation, regulation, and insurance.

In June 2018, the University of Salford purchased a Navya Autonom Shuttle, a purpose built first-mile/last-mile connected and autonomous vehicle (CAV). The university’s strategy was and is to gain first-hand experience in the real-world deployment of AVs, develop industry partnerships and leverage the experience and partnerships to attract both industry and academic research and provide students with industry-relevant curriculum and projects. 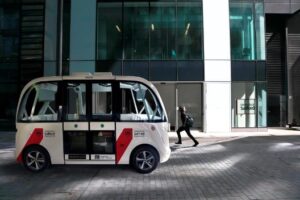 The first hurdle was insurance: All UK insurers contacted quickly declined; there was typically stunned silence when the answer to the question “is it right-hand or left-hand drive?” was “neither, it has no steering wheel”. But even after more detailed explanations it was evident that the UK insurance companies contacted had no offering and quickly declined. It was only after a wider search, did the university secure insurance from a France-based company.

The next step was to register the vehicle with DVLA. This, as of May 2020, is still an ongoing activity as purpose-built CAVs are not covered by current regulations. Even when trying to register the CAV as a prototype vehicle, the regulations require a forward-facing driver’s seat; the Navya shuttle is truly bi-directional (no front or rear) and there is no driving seat. The university is currently working with Navya and the Centre for Connected and Autonomous Vehicles (CCAV) to find a way forward for purpose built CAVs.

As the university works to register the Navya shuttle it’s been running the CAV on private campus roads. While not a very challenging route it has provided a more realistic test environment than sanitised testing facilities. 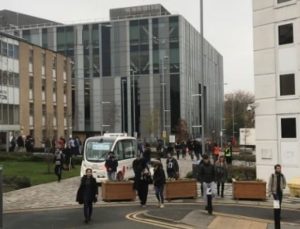 For one thing the campus is populated by students who highlighted a totally unforeseen issue, an issue that will cause problems for AVs, at least until the novelty wears off: students realised that if they walk in front of the AV it will stop, so they effectively pay little attention to the vehicle and cross directly in front of it to get where they’re going. While frustrating, this has highlighted some of the behavioural psychology challenges facing CAVs as they are introduced to our roads.

For example; what are the implications of a mixed environment whereby CAVs and driver-controlled vehicles share the same road? If a human driver knows a CAV will always give way it is highly likely they will push-in and pull-out in front of CAVs; effectively bullying CAVs to a potential standstill.

Another issue is highlighted in the song lyrics of Manchester band, The Smiths: “The rain falls down on this humdrum town”. While I’d disagree with ‘humdrum’ it’s fair to say Salford, being so close to Manchester, does have its fair share of both types of rain (vertical and horizontal). CAVs typically use a mixture of lidar, radar, and vision systems. Current lidar technology is affected by rain, which scatters the laser light creating false signals and effectively blinding the sensor immediately halting the test run. Not much of a problem in California, but if we want to see CAVs on UK roads companies will need to either address the limitations of lidar, or, like Tesla, remove it completely from their sensor array and instead use a combination of cameras, ultrasonic sensors and radar. 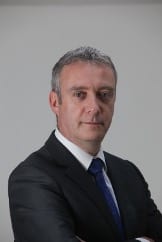 The university is working closely with Transport for Greater Manchester and Salford City Council, both of which are keen to support the testing of the university’s CAV. A phased deployment plan is under development that, once the CAV is registered, will see the test routes expanded onto public roads. To support this phased approach the university will undertake detailed risk assessments and produce a safety case. Again, there is currently no approved format for purpose-built CAVs that can be followed.

The University of Salford has also developed a good working relationship with Navya and provides frequent feedback on the vehicle performance. The team at Salford has amassed considerable experience in running the Navya shuttle and the knowledge and skills are proving valuable in other AV and AV-related projects, research, and teaching.

The benefits of purchasing and running the Navya Autonom Shuttle has given the university a unique insight into the challenges facing deployment of CAVs onto UK roads but has also highlighted the opportunities for CAVs to form an integral part of a multi-modal mobility system.