A new kind of airport has been given the go-ahead in the UK that will soon see drones, air taxis and even flying cars become part of the country’s urban transport infrastructure. Alisdiar Suttie reports…

Sited next to the Ricoh Arena stadium, exhibition, event and conference centre in Coventry, the Urban Air Port Air One hub is a flat-pack terminal for electric vertical take-off and landing (eVTOL) aircraft.

The eVTOL element of this solution is vital to the Air One concept as it means the Urban Air Port (UAP) takes up less than half the space of an existing heliport. UAP founder and executive chairman Ricky Sandhu says: “A conventional heliport is not that small as rotor craft need a lot of space for safety, noise and emissions, which means a lot of distance between the heliport and surrounding buildings.

“They also need space for servicing and storage, whereas the UAP integrates landing and stands in close proximity, which will provide an enhanced experience for passengers.

“The UAP is also cleaner and quieter, allowing us to position one in areas that might otherwise be difficult to access. Our design is scaleable, so it can fit into a downtown location for fast transport turnarounds. This design makes the UAP ideal for other applications such as emergency zones or military use.”

One-stop shop
The UAP design brings the whole airport together in one eVTOL package with operations, software, logistics, consumer interaction, aircraft suppliers, and those who operate the air corridor. The company believes this is a one-stop solution and is unique as a ready-made offer.

Another advantage of this airport configuration is reduced costs. “It’s an opportunity to rethink an airport and its capital expenditure costs,” says Sandhu.

“Air One’s capital expenditure is much lower and this enables us to access high-value locations with lower operating costs thanks to the modular design.’” 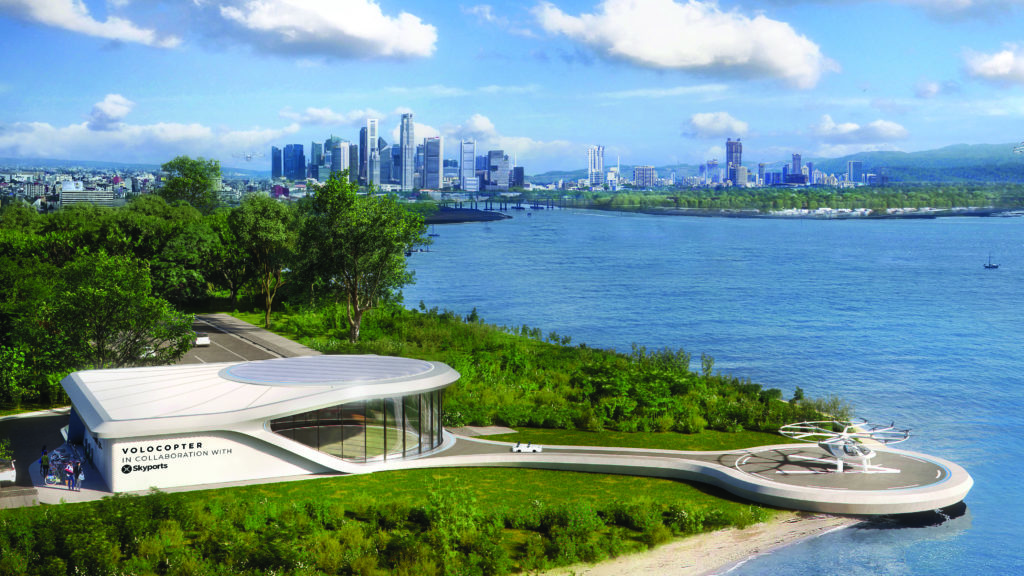 Sandhu explains that the technology is centred around the UAP launch pad – a circular stand in the centre of the UAP that lowers down into the building for passengers or cargo to be loaded or unloaded. It does away with the need for a runway to save space and the design is also adaptable for use on building tops or on a floating platform for marine use.

For Coventry’s Air One, UAP has received £1.2m of grant funding from UK Research and Innovation’s Future Flight Challenge. Cargo drones are being supplied by UAP’s partner Malloy Aeronautics and its large cargo drones will be demonstrated at the Air One site. There is also backing from Hyundai, which is working on its own eVTOL aircraft that it expects to be airworthy and certified by 2028. The S-A1 is what Hyundai calls a Personal Air Vehicle, which is similar in appearance to a small plane but with rotors rather than propellors to provide the lift and allow it to take off and land vertically.

Though Hyundai’s SA-1 will be used to carry cargo, it is also aimed at the passenger market and is being developed in partnership with Uber. Eric Allison, head of Uber Elevate, says: “Hyundai is our first vehicle partner with experience of manufacturing passenger cars on a global scale.

Early adopters
However, Coventry’s Air One is on target to open in 2021 and Sandhu says the project is even running slightly ahead of schedule despite the challenges of a global pandemic. This requires eVTOL aircraft that can fly now, which means early flights will be by unmanned drones for cargo deliveries. The benefits of this are rapid journeys from a hub to the customer that are not constrained by congestion on the street, but it does bring other challenges.

UAP has been working with the Civil Aviation Authority (CAA) to focus on certification of the infrastructure, vehicles and landing pad. While many of these standards are the same as for a helipad, unmanned traffic corridors is where UAP and the CAA have been working hardest on testing, evaluating and certifying. Sandhu says this is not only important to make Air One and other urban airports operational but for public confidence in this new technology. “Many people thought flying cars wouldn’t happen,” Sandhu says. “But as people get close to the technology, they realise it can be practical. We are partnering with Coventry University to make sure the experience is friendly as well as safe.”

Other companies are also working with the CAA, such as Germany’s Volocopter, which is developing cargo and passenger eVTOL aircraft. Fabien Nestmann, vice president of Volocopter, says: “In many cities, we simply cannot add any more roads, bridges or railway stations. They are at capacity. Electric flying inside urban areas is now a possible solution. The challenge is to find sensible, safe regulations for the aircraft, infrastructure and landing sites.

“We’ve found regulators are very interested, forthcoming, pragmatic and cooperative. It is encouraging to have an open national authority that constructively challenges proposals and aims to develop a regulatory framework together that provides a safe new form of transport, in the spirit of making things happen. This cooperative, joint working approach is how the CAA is playing the role of both negotiator and innovator.” 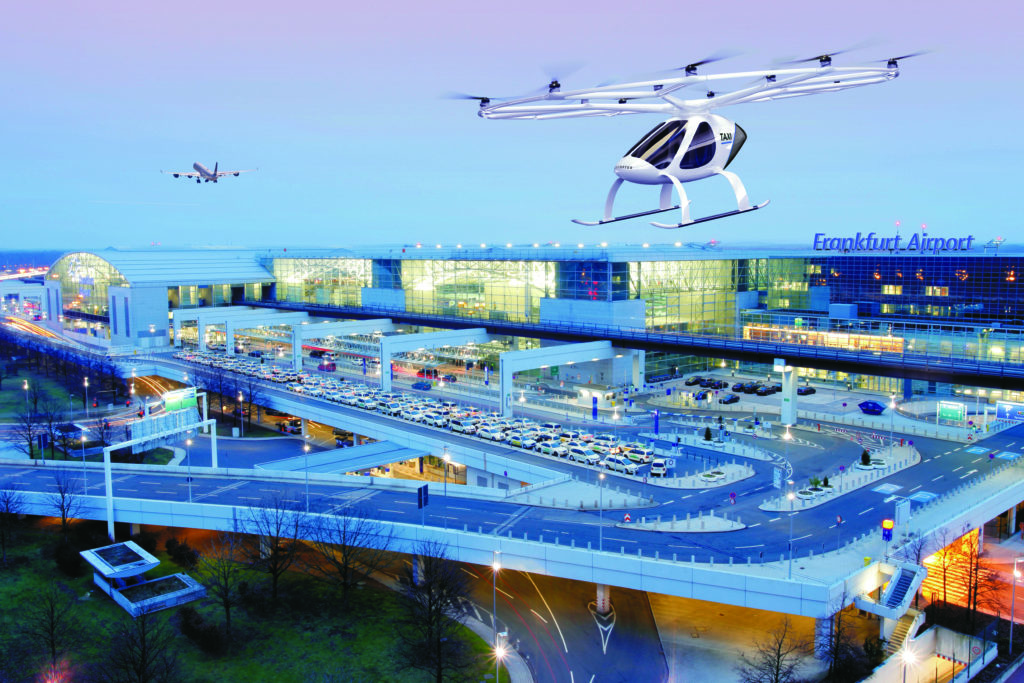 Off-grid aspirations
Another challenge is providing electricity charging for all of the aircraft using the UAP. It has been designed to work entirely independently of a power grid, using wind, solar or hydrogen power so that it can be used in emergency situations and be quicker to deploy. However, the Coventry project will be connected to the National Grid to give it greater resilience.

The ability to operate the UAP platform off-grid is very important to Sandhu as he sees a lot of its users in disaster and emergency response, humanitarian relief, hospitals, railway operators, and defence. Many of these require an airport in areas where there is no electricity grid, or it has been disrupted. At the other end of the spectrum are logistics firms who need a compact base within a city to use as a delivery hub.

Sandhu sees the UAP as a hub in a wider sense for all forms of zero-emission transport, somewhere electric car and motorcycles users will charge their vehicles. He says the UAP will be an “electric watering hole” for all electric vehicles. An urban setting may come with challenges, but it’s ideal in Sandhu’s view. “If you have to travel too far to reach an airport, it doesn’t work,” he says. “It has to complement a journey with a quick connection and be available to a wide section of people. It’s not sustainable if it’s only on offer to high-net-worth individuals in the way a heliport is. We see commuters, tourists and anyone looking to make a congestion-free journey using a UAP.”

The boldness of UAP’s ambition is clear when the company states it is looking to set up 200 of its airports within the next five years. It is already in discussions with other UK cities such as Birmingham, Cambridge, Luton and Portsmouth, and Nordic countries where it will build land and offshore hubs.

Gary Cutts, Future Flight Challenge director, UK Research and Innovation, says: “Urban Air Port has the potential to revolutionise cities across the world, making them more connected, cleaner and accelerating our green economic recovery. This project epitomises innovation at its finest and will help to position the UK in the vanguard of electric urban air mobility.”

Full skies
A report for NASA by consulting firm Booz Allen Hamilton says that urban air mobility (UAM) in the USA alone could amount to US$500bn (£375bn) by 2030. It concludes that the UAM market will be constrained by concerns from passengers about safety and the inability of the aircraft to operate in adverse weather. However, many of these worries should be overcome with technology and increased component efficiency.

With more than 300 eVTOL aircraft being developed globally at present, there is rapidly increasing confidence among professional investors as well as military and government customers for UAM. Drone manufacturer Astro has already successfully flown its Elroy craft with human passengers, further feeding confidence among investors in this field.

While Urban Air Port is developing an affordable, easily deployable air terminal for eVTOL, the cost of developing the technology remains high. However, research by Horizon Aircraft, which has built the Cavorite X5, shows the eVTOL market could be worth US$90bn (£65m) per year by 2050. By then, it’s expected there will be as many 200,000 eVTOL aircraft operating around the world.

However, NASA strikes a note of caution as it says so many more aircraft in the skies will put considerable strain on air traffic management systems. It also points out battery technology for recharging times and weight need to improve significantly to make UAM a practical, affordable form of transport.