In the second of two special extended interviews with traffic professionals on the technological evolution of traffic signals across the UK, Katie Searles speaks to David Watts, ITS engineer for Transport for Greater Manchester (TfGM), about the city’s use of ‘smart’ traffic lights… 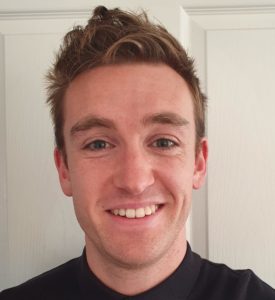 What is TfGM looking to learn over the three-year Smart Junction project with Vivacity Labs?
We want to obtain a much better understanding of pedestrian and cycle flows across the study area. This has been particularly valuable over the course of the pandemic, allowing us to monitor changes in pedestrian movement and footfall against changes in policy and various restrictions.

Whilst TfGM have an extensive network of conventional monitoring systems such as automatic traffic counters and automatic cycle counters, capturing pedestrian volumes has been particularly challenging. Having access to around 200 sensors through this project has provided a much deeper insight into understanding pedestrian movements around the study area junctions.

We are looking to assess and develop the next generation of traffic control . Given TfGM’s extent of adaptive control systems already (SCOOT and MOVA), trialling Vivacity’s AI control allows for direct comparison with these. The trial area represents one of Greater Manchester’s larger SCOOT regions and enables the study of AI signal operation both in isolation and as part of a network of signals.

The timing of the Covid-19 pandemic has perhaps curtailed some of the comparison opportunities, but has allowed us to observe how responsive the AI is to vast changes in traffic flows, particularly over various stages of lockdown policies. With the improved granularity of data of pedestrian and cycle flows, it also provides an opportunity to explore how signal timings respond dynamically to these, particularly at junctions in busier retail areas with high pedestrian footfall such as Deansgate.

With the highway network across the study area often being heavily saturated, we’re also keen to explore how an alternative control system manages high levels of congestion during peak travel periods, whilst also seeking to support active travel modes where appropriate. 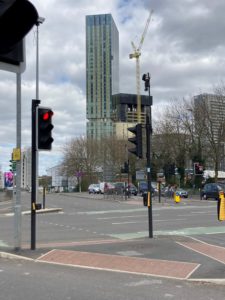 Sensors from Vivacity Labs are attached to traffic lights across Manchester

We also want to assess the ease of implementation of an alternate traffic signal control system. Whilst keeping in mind that Vivacity’s Smart Junctions ‘product’ remains in development, it continues to be valuable to see how the system is setup, from the planning stage through to live deployment. Implementing any traffic signal control system requires the installation and monitoring of various types of hardware and software, in addition to longer-term validation of such systems. Whilst there remains ‘typical’ hardware setup of AI control (installation of sensors, hardware in the traffic signal control cabinet etc.), it is hoped that longer-term validation (often required in existing control systems) will not be required as the AI should be able to detect changes to the environment and traffic flows.

How can AI-powered traffic lights assist in encouraging active travel in Greater Manchester?
As set out in the ‘Greater Manchester Transport Strategy 2040’, it is the ambition of the region to be net zero carbon by 2038, in addition to having 50% of all journeys made in Greater Manchester being made by walking, cycling or public transport. In order to achieve this vision, it is important for TfGM as the transport authority to utilise technology and various tools available to facilitate this.

We operate an extensive number of traffic signals that under adaptive control systems currently (over 750 junctions on SCOOT and over 250 on MOVA), with these responsively adapting to changing traffic flows under increasingly saturated circumstances. Whilst these systems perform well and offer significant benefit over the previous traffic control systems to the region by reducing congestion, the logic behind the systems has largely remained the same for the last three or four decades.

Being able to make use of AI presents a wealth of potential opportunities to the field of traffic signal control, making use of deep neural networks and reinforcement learning to finely tune an extremely flexible algorithm whilst retaining all safety critical features. Combine this with the vastly improved ability of video analytic sensors to detect active travel modes and include these datasets as a primary input into such systems, this will result in a more dynamic and responsive algorithm, supporting increasingly important active travel networks.

‘On the ground’, for example this may look like extended or more responsive pedestrian stages at junctions (where appropriate), adaptive changes to the typical signal stage ordering, or extending stages to accommodate an increased volume of cyclists, but as the technology develops we will have a more sophisticated tool for managing the transport network as a whole with the ability to prioritise one mode over another as the circumstances call for.

Does the system also help with congestion levels and air quality in the region?
The Vivacity sensors used in this project provide anonymous real-time data feeds on counts, classifications, speeds, and vehicle journey times, along with information on queue build-up. This wide range of sensor data inputs is used to give algorithms a broad understanding of the current situation, that are able to adapt quickly to changing traffic conditions and efficiently implement both short-term traffic optimisations based on precise current vehicle positions, and longer-term optimisation on a local or regional level.

But the technology moves beyond just reducing congestion and journey times. Through AI and machine learning, there is also the potential to optimise signal control to optimise roads for:

The smart traffic lights are being trialled in real world environments – was there simulation/digital twin testing prior to deployment?
Yes, simulations are a critical part of the Smart Junctions ecosystem, as they are used to train the AI agents before they are deployed in the real world. 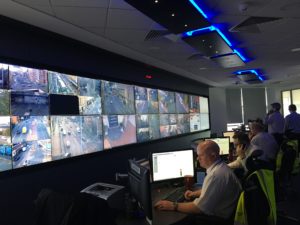 How important is data in traffic light management?
Data is hugely valuable in managing traffic signals, particularly across a frequently changing and developing city region, where even relatively small changes can have an impact on congestion levels and travel behaviour.

TfGM has a valuable network of existing monitoring systems that provide daily, weekly, and monthly insight into travel behaviour across Greater Manchester. This data helps address congestion ‘hotspots’ and provides useful data for modelling and planning future changes to the network.

Existing traffic control systems such as SCOOT and MOVA rely on data inputs to respond to varying traffic flows across a junction/region, enabling traffic signals to respond accordingly throughout the day. These data driven decisions are hugely valuable to us and transport authorities across the country.

However, pedestrian flows, cycle flows and lane closures are datasets that aren’t readily captured through existing systems, often requiring human intervention to optimise appropriately. Capturing this data will be a key component in the future of traffic signal management.

Being able to quantify the benefits – or dis-benefits – of traffic signal changes across a region/network is also important, allowing for greater understanding of the wider impact of such changes. Existing metrics such as congestion of degree of saturation remain valuable, whilst alternate methods such as Bluetooth or ANPR journey times can provide a wider context to changes across a corridor. These can also feed into future business cases for further local and regional development. TfGM is continually looking at new low-cost, high-quality sources of data to support this.

What do you think the smart traffic light systems of the future will involve?
The most important aspect of future traffic control is the ability to manage all parts of the network better, improving safety and efficiency, reducing carbon emissions, and cutting down on noise as much as possible.

‘Smart’ traffic systems of the future will be vital in achieving this. They will need to be informed by an ever-increasing wealth of data, likely making use of a hybrid approach, with both ‘old’ or ‘traditional’ data inputs such as SCOOT loops being used in combination with newer sources. This will likely include highly accurate video analytic sensors, such as the Vivacity sensors used in the Smart Junctions project, floating vehicle data or mobile location data, in addition of a vast network of air quality monitoring sensors.

Recent years have seen more obvious cases of policy influencing traffic signal control, such as the wider deployment of pedestrian priority by Transport for London or some of the trials of signal control aimed at reducing vehicle emissions by avoiding HGV idling across junctions/corridors. With wider collective ambitions of governments and local authorities to reduce emissions and improve the uptake of active travel, it is likely that the wider deployment of similar policy led traffic signal control systems will continue. Understanding the effectiveness of such measures will require evidence and statistical data, obtained from the increased range of data sources.

Having this wider and more detailed range of data sources will likely lead to an improved range of prediction tools for transport authorities. Whilst this continues to be explored by technology providers currently, AI-led technologies will likely be able to understand an incomprehensible range of scenarios and will hopefully be able to automatically respond to an ever-changing highway network. This would ultimately lead to a transport network that is less reliant on human intervention.

An abridged version of this interview appears in a wider feature on the technological evolution of traffic signals in the September issue of CiTTi magazine, which you can read online now! 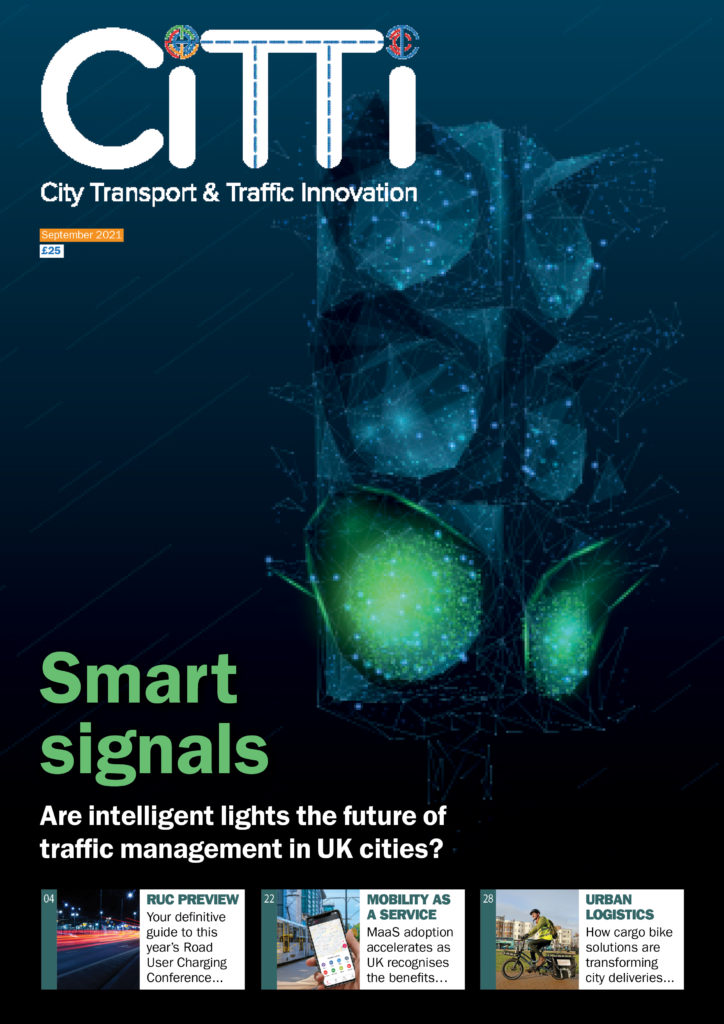 You can also read an extended interview with Irfan Shaffi, operational control manager at Transport for London, about the capital’s use of ‘smart’ traffic lights, here.