Do electric scooters pose a menace to society, or are they a key part of the future of mobility? Katie Searles speaks to local authorities and operators currently trialling the technology about the transport mode’s perceived benefits and potential pitfalls…

There are currently 10 e-scooter trials running in England following new regulations allowing for use of rental models on roads, cycle lanes and defined routes. The UK Department for Transport-approved schemes are designed to help legislators better understand whether these zero-emission vehicles will reduce congestion and assist in meeting wider low-carbon targets, as well as to assess safety concerns both for riders and other road users.

Though each pilot differs in various ways, all prohibit the use of e-scooters on pavements, feature a 15.5mph speed limit and recommend the wearing of a crash helmet. Riders also need to hold at least a provisional driver’s or moped licence and must be aged over 16, though in some cities the minimum age is 18. Use of privately-owned e-scooters on public roads remains illegal (see Private problem sidebar).

After the first trial launched in Tees Valley in July, UK transport minister Rachel Maclean described all trials that followed as an opportunity to build a greener, more sustainable transport model. “E-scooters may offer the potential for convenient, clean and cost-effective travel that may also help ease the burden on the transport network, provide another green alternative to get around and allow for social distancing. The trials will allow us to test whether they do these things.”

The UK government will continue to monitor the benefits and impact of e-scooters over the next 12 months, as will the companies involved in the trials in towns and cities across the country.

One such company is Ford Motor Company’s micromobility unit Spin, which, since launching an e-scooter trial in Milton Keynes in August, recorded over 10,000 rides during the first month alone. Milton Keynes Council claims the figure is closer to 40,000 rides across all three operators of the trial – Lime, Bird and Ginger – with around 7,500 regular users.

Commenting on the popularity of the scheme thus far, Brian Matthews, lead of transport innovation at Milton Keynes Council, says: “We believe the success is down to having great infrastructure. We have an extensive network of shared and segregated tracks, called Redways, which means scooters can operate legally away from roads and get to almost anywhere in the city safely and quickly.”

Matthews also points to the difference felt by users as a factor. “We all tend to dread, or at least not enjoy, transport,” he says. “The commute is often plagued with congestion and overcrowding, leading to generally a miserable experience. However, what I have noticed is that everyone I have seen on an e-scooter has had a smile on their face.”

While Steve Pyer, UK general manager of Spin, agrees that the ‘fun’ element of using e-scooters sets them apart from other modes of transport, he believes collaboration among suppliers is required to give the technology a real chance of being used beyond the end of the year-long pilot schemes.

“There is a friendly rivalry, this industry is really small and you tend to bump into people. From my time at Mobike [a fully station-less bicycle-sharing system], one of my guys has since gone to Tier Mobility, another to Dott. Everybody knows everybody, there is a lot of friendliness, so we do help each other out and we want the industry to succeed, but we are friendly rivals as well.” 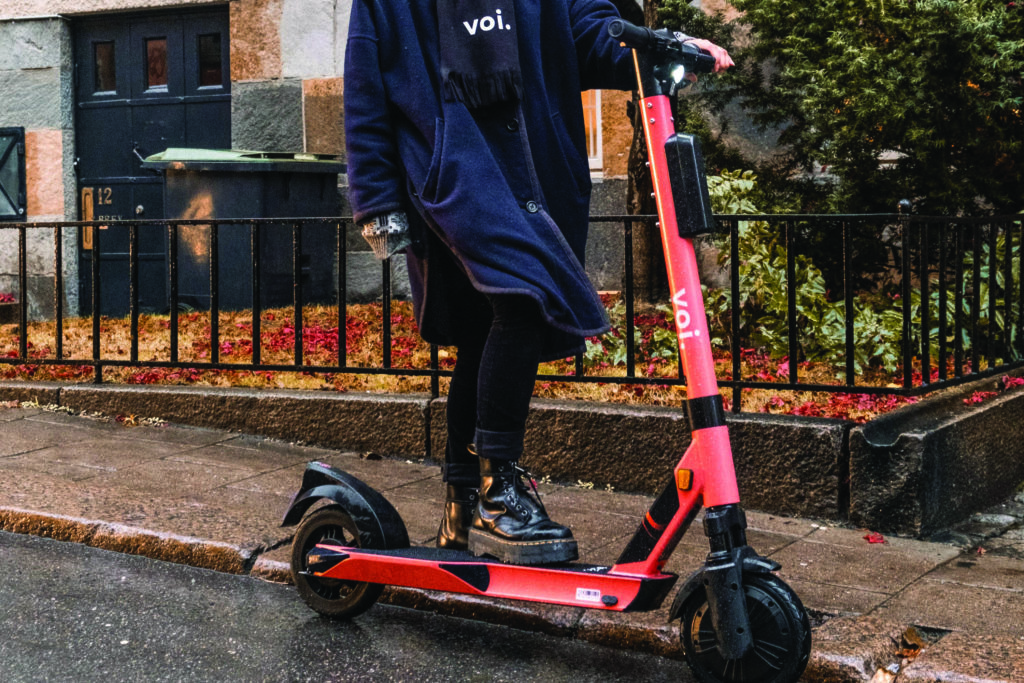 Micromobility monopoly?
One supplier, Voi Technology, has managed to secure multiple trial contracts and is currently responsible for operating schemes alongside local authorities in Cambridge and Peterborough, Northampton, the West Midlands and the West of England, covering Bristol and Bath.

The Stockholm-based operator has built up over six million registered users across Europe over the last two years and Richard Corbett, Voi’s general manager for UK, Ireland and Benelux, admits the company has leveraged this knowledge and experience to develop the UK trails.

“Voi works with stakeholders in each city, including local accessibility groups, such as the Royal National Institute of Blind People, and local councils, to understand what is and what isn’t working, as well as the Department for Transport,” he says. “Depending on their feedback, the trials may change. We are pro-regulation and if that regulation changes we will make the appropriate changes.”

While Voi appears to be the operator of choice for many towns and cities across the UK right now, British e-scooter supplier Beryl, which is leading a trial in Norwich with Norfolk County Council, is concerned by the potential implications of a possible market monopoly.

Beryl CEO, Phil Ellis, says: “It’s interesting how many contracts Voi has won. They obviously have some secret sauce that has struck a particularly fruitful chord with UK local authorities. It’s a bit of a challenge for them to now deliver against that success and I’m sure everybody is rooting for them to do well because, if it goes badly, then it’ll set back all forms of micromobility for a while.”

Ellis believes the UK trials are an opportunity for city authorities to “nally hold all the cards” on how e-scooters should be implemented. “Let’s see how the industry copes under higher levels of scrutiny,” he says. “There is evidence to suggest that it is going to be a little tougher than expected, but equally there will be plenty more successes.”

Such concerns could well be compounded following the suspension of Voi and Coventry City Council’s e-scooter trail, after incidents of misuse by riders were reported in October. The scheme has been paused indefinitely while the council and operator review the first few days of the trial and identify ways in which it can recommence in an appropriate manner.

“No decision has yet been made to restart the trial, but any decision to restart in the future will have to take into consideration both the technological abilities of the operator and the location of any trial that minimises interaction with the public,” a spokesperson for Coventry City Council tells CiTTi. 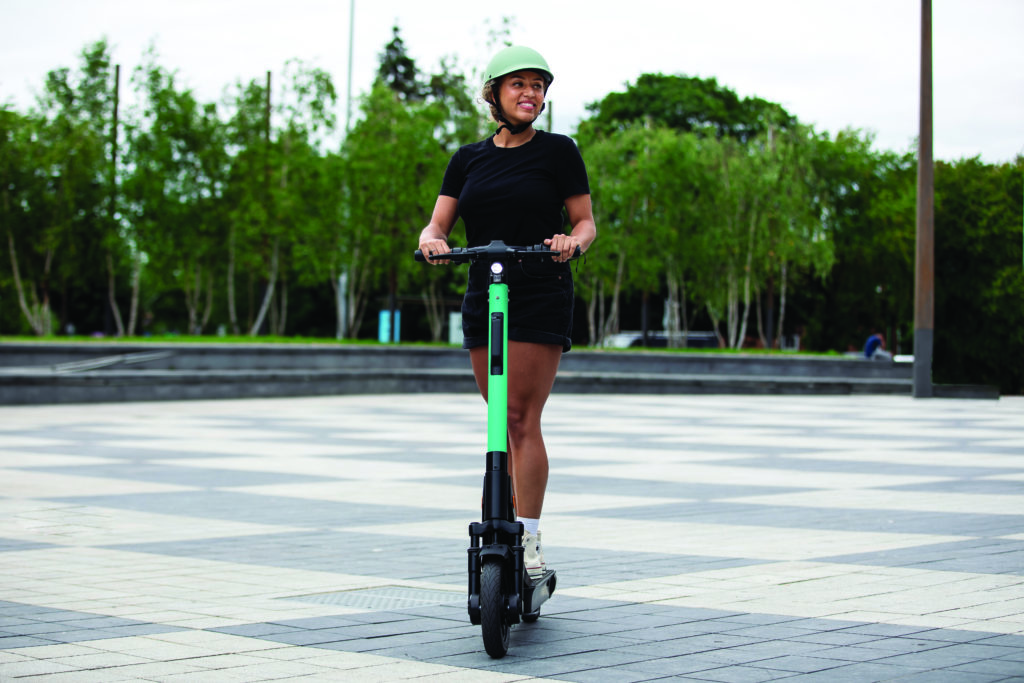 Tier Mobility is rolling out swappable batteries across its fleet, removing the need to collect and transport the vehicles to a warehouse for charging

Fenced in
Riding e-scooters on pavements and in prohibited zones, combined with the vehicles becoming a form of street clutter caused by irresponsible parking, are among the concerns held by those involved in the trials. Suppliers hope geofencing – where operators use GPS technology to limit precisely where a scooter can be ridden or parked – will help reduce such incidents.

Geofencing has been deployed in cities such as Canterbury, where Bird is providing Kent County Council with a fleet of e-scooters for a controlled set route serving students from the University of Kent and Canterbury Christ Church University. Bird has worked with the council to geofence the approved route and the e-scooters will power down if they cross the boundary. If the trial zone is successful, the council says it will open it up to a broader area.

Similar technology is being implemented in the Norwich trial, with Beryl promoting a ‘hybrid’ model that incentivises riders to park in geofenced bays. According to the London-based company, this approach provides cities with a higher level of control over the vehicles, encourages responsible parking and ensures a service does not impede on a city’s social infrastructure.

It can also be used to control the speed of the e-scooters. Spin limits its e-scooters to 10mph due to the number of pedestrians and other road users within the start of the trial area (outside Milton Keynes Central railway station). Voi also caps its e-scooters to 10mph until riders become more confident on the vehicle. According to Voi’s Corbett, the company may consider increasing the speed limit, but only after further analysis. 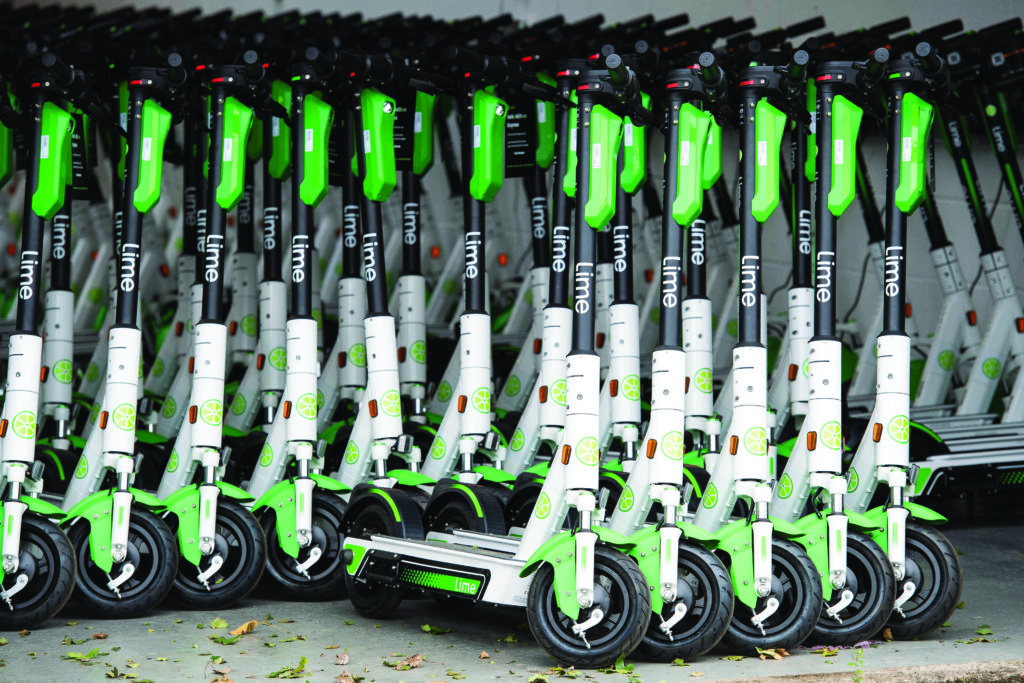 Some 250 Lime e-scooters are being trialled in Milton Keynes

Strong start
Despite the Coventry trial stoppage, e-scooters trials continue to be rolled out at pace, with schemes announced in York (with Tier Mobility) and across Staffordshire (with Ginger Town and Zwings). One of the most successful launches to date is in Tees Valley in the northeast of England. The pilot, which was the first to launch in the country in July, had reached the milestone of 25,000 miles ridden by September. The route, which launched in Middlesbrough, has since been extended to include Hartlepool and Redcar.

Tees Valley mayor, Ben Houchen, says: “I’m delighted that we’ve seen such a big take-up of e-scooters in Hartlepool, Midldesbrough and Redcar and Cleveland, as we continue the roll out pilot across Tees Valley. It shows there’s a real appetite for this clean energy alternative to public transport and the trial is once again highlighting how we do things differently here, putting innovation at the heart of our economic growth.”

According to Houchen, many of the trails’ users don’t just take one or two trips due to the novelty factor, but are instead using e-scooters consistently and regularly as a genuine alternative to buses and cars. “It’s not hard to understand why – they are an effective, efficient way to get from a-to-b at a low cost and, given the current issues surrounding the coronavirus pandemic, offer a socially-distanced mode of travel,” says Houchen.

Notably, London has yet to launch an e-scooter trial. According to Spin’s Pyer, there’s a good reason for the capital’s surprising omission. “London is the big one that everyone is looking out for. Transport for London is working really hard with the 33 boroughs to try to get consensus – it is a tough job, but we are looking forward to that coming out.”

According to the London Borough of Merton, a London trial is expected to launch in spring 2021 but is “subject to various legal issues being resolved and receiving Department for Transport approval”.

Private problem
Despite the fact that numerous rental e-scooter trials are currently underway in several parts of the UK, privately-owned models remain a common sight in many towns and cities across the country.

Though widely available for purchase, privately-owned e-scooters remain illegal on public roads, with riders liable to receive a fixed penalty fine of up to £300 and six points on their driving licence if caught using them by authorities.

Becky Needham, road safety officer at the Royal Society for the Prevention of Accidents (RoSPA), believes more needs to be done to make people aware of the different rules between rental and privately-owned models: “The only place a private e-scooter can be used is on private land, with the permission of the landowner. These cannot be used on a public road, even in areas where a hire scheme trial is taking place.

“RoSPA is pleased that e-scooters are being trialled on Great Britain’s roads in a regulated and safety-aware manner before they become fully legalised, as e-scooters have the potential to pose a range of huge benefits including decreased congestion and improved public health. However, RoSPA is acutely aware that e-scooters pose a range of serious safety concerns and their usage is not without risk.”

The UK government’s Transport Committee has also called for “robust enforcement” to eliminate pavement use, street clutter and ensure the safety of pedestrians, particularly disabled people.