Road accident casualty levels in Great Britain are at their lowest since 1979, a report by the UK Department for Transport (DfT) has revealed.

The Reported road casualties in Great Britain: 2019 annual report was issued in September and also recorded a 2% decline in road deaths on the previous year to 1,752.

According to the study, there has been a period of substantial reduction in both fatalities and causalities from 2004, with figures levelling out between 2010 and 2019. 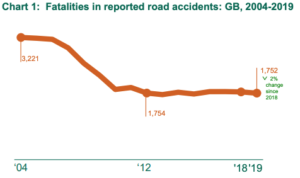 The data was collected from information from police forces either through officers attending the scene, members of the public reporting accidents to police and recently online.

Rural roads accounted for the majority of road accident fatalities (57%) and, despite motorways carrying 20% of traffic, only 6% of fatalities occurred on the motorway network.

The report also broke down the casualties by road user with car drivers accounting for 42% of fatalities, down 5% on the previous year. The report concluded that this is unsurprising as cars account for around 80% of traffic. It also highlighted a 3% increase in the number of pedestrians killed on Britain’s roads. 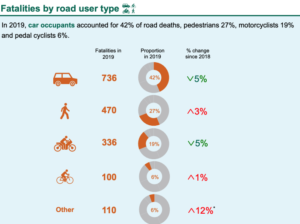 Car drivers accounted for 42% of road fatalities in 2019

The Royal Society for the Prevention of Accidents (RoSPA) said it was concerned that the figures had not reduced much since 2010, with an increase in the number of over-60s killed on Britain’s roads from 588 in 2018 to 638 in 2019.

Michelle Harrington, road safety manager at RoSPA, said: “We know that 196 of the over-60s killed in Britain’s road last year were behind the wheel at the time of the collision. If you are starting to notice any changes in your driving or are concerned about someone else then we would encourage you to seek support.”

The report indicated that age of driver is a factor that affects road causalities, including newly qualified or older drivers. Other factors are distance travelled, behaviour of both drivers and pedestrians and weather.