Nick Molden of Emissions Analytics, and Peter Striekwold of Dutch vehicle authority RDW, question whether the supposed benefits of connected and autonomous vehicles are reduced or even eliminated when the whole system is considered…

Autonomous driving holds out the promise of improved road safety and mobility, and a cleaner environment. In fact, the European Commission in 2018 asserted that transport “…will be safer, cleaner, cheaper…” as a result of fully automated and connected mobility systems. Other declarations by the European Union (EU), United Nations, vehicle manufacturers and others, have left the widespread impression that connected and autonomous vehicles (CAVs) will reduce the environmental footprint of vehicles. But is this true?

The claim is based upon more efficient operation, primarily as the result of smoother driving in the widest sense, including less aggressive accelerations and decelerations, better traffic engineering such as intelligent traffic light phasing, and inter-vehicle communications. Emissions Analytics considered these benefits in a study conducted with the Centre for Transport Studies at Imperial College London in 2017, called Optimised Vehicle Autonomy for Ride and Emissions (OVARE) and part funded by Innovate UK. 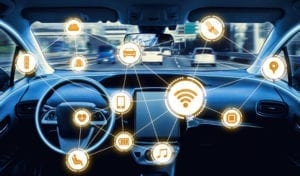 The prospect offered by autonomous vehicles has been asserted by many to be ‘cleaner’, and this generally has been believed without in-depth scrutiny

But this study omitted consideration of the internal and external devices required to power the automation, and their energy consumption. Could it be that the benefits of automation are reduced or even eliminated when the whole system is considered? This article reviews the OVARE findings, and puts them together with analysis of the latest research on the energy requirement to determine what the net benefit is.

The model was configured to use traffic volumes that reflect typical real-world conditions, with vehicles introduced to the simulated zone at five different entry points. Scenarios for 0%, 20%, 50% and 100% penetration of CAVs were modelled. The results are shown in the table below for peak time traffic scenarios. The reductions during off-peak times were lower – typically 5% or less.

The results shown above are for peak time traffic scenarios. Reductions during off-peak times were lower – typically 5% or less

The potential 18% reduction in fuel usage and CO2 emissions is material in the context of the cost of transportation for consumers, energy security and climate change emissions. In the EU, CO2 emissions from passenger cars must be reduced by 37.5% between 2021 and 2035 – CAVs could therefore in principle achieve half of this reduction. Reducing NOx emissions by 21% would reduce the number of cities across Europe with non-compliant concentrations of nitrogen dioxide under the Ambient Air Quality Directive – CAVs could therefore lead to health benefits and reduce the need for costly interventions such as clean air zones. But, to reiterate, these outcomes do not factor in the potential impacts of the connectivity or automation systems themselves.

Now switching to the energy consumption side of the equation, we need to consider both the consumption by the on-board electronic devices required to run the automation and data processing that might take place in the vehicle, on the infrastructure side or in the cloud. For the purposes of the following calculations it is assumed that all vehicles are fully automated at SAE Level 5.

The devices required by this may include ECUs, cameras, lidar and radar – typically over 20 devices in total. With power ranges of between 1W and 80W each, an approximate total power requirement per vehicle would be 200W. Based on data from the Netherlands – as an advanced European economy – the average number of driving hours per passenger car per year is 440 hours, which implies an average electricity consumption from automation of 88kWh. Based on the Netherlands’ current energy mix, with 1kWh resulting in 400g of CO2 emissions, the average battery-electric vehicle would emit 35,200g per year. Taking an average distance travelled per car per year of 13,000km, this implies CO2 emissions of 2.7g/km, just from running the on-board devices. If the power were drawn from liquid fuel in an internal combustion engine, 1kWh would result in around 780g, implying CO2 emissions of 5.3g/km.

More significant is energy required for data processing. Volvo has stated that autonomous driving requires “…a few GB [gigabytes]per second…”. Other estimates vary, from 1.4 to 19TB [terabytes]/hour, so let’s be cautious and assume 0.4GB/second. This would imply 634TB/year. Taking a cautious estimate of energy consumption from that data processing rate, we use 0.1kWh per gigabyte from Pihkola et al (2018). This conversion factor is subject to significant uncertainty, as set out in Aslan et al (2017), ranging from 0.023 to 7.1kWh. Using the same conversion of grid electrical energy to CO2 and distance travelled per year, the resulting estimate of CO2 emissions from data processing is an astonishing 1,950g/km. This compares to current average tailpipe CO2 emissions in the Netherlands of 121g/km and the 95g/km EU fleet average target – automation asks for at least 16 times more. Put another way, with an implied value of €95 per g/km from the EU fines for exceeding the 95g/km target, the ‘cost’ of automation would be around €185,000 per vehicle. 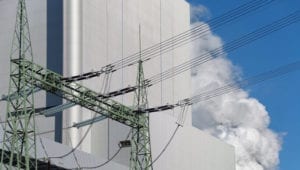 If the global supply of energy were to increase to the point of cheap, surplus renewable energy, the CO2 issue would theoretically disappear

For illustration, if 25% of the processing happens on the vehicle, that would reduce the range of an average European internal combustion vehicle to around 160km. A battery-electric vehicle with a 100kWh battery and 400km range would only be able to travel about 70km. This may well not even be physically possible, if the engine is not powerful enough to run the electronic systems and move the vehicle adequately at the same time.

This would clearly render automation unviable from both an emissions and cost point of view. The CO2 and fuel consumption benefits forecast by the OVARE project would be wiped out, as too would the NOx benefits in all likelihood. If the global supply of energy were to increase to the point of cheap, surplus renewable (zero carbon) energy, the CO2 issue would theoretically disappear, although there may still be too little power on board to move the vehicle. Increases in data processing efficiency would reduce the energy requirement and may solve this power problem, as would reducing the amount of data transfer between vehicles and with the infrastructure. On the other hand, increasing requirements around data security and vehicle safety may lead to ever-increasing power demands.

One solution may be to develop processor chips better designed for this type of computation, and thereby more efficient. This could become a significant differentiator between producers, analogous to the differences in battery design. A further solution may be to restrict the domain of automation, accepting that autonomous driving may only be viable within certain situations or geographic locations, rather than covering every conceivable case. 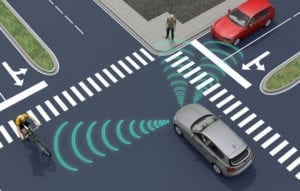 Autonomous driving may only be viable within certain situations or geographic locations, rather than covering every conceivable case

This analysis does not attempt to evaluate the secondary effects of automation on traffic volumes. If automation proves to be an attractive consumer proposition, especially if it accelerates the trends away from some forms of public transport and towards private options, this could make congestion worse. Not only would this waste productive time, but would have the risk of making air quality worse due to legacy internal combustion engines being forced to drive in a more stop-start fashion, and higher tyre and brake wear emissions from all types of vehicle.

In short, the prospect offered by autonomous vehicles has been asserted by many to be ‘cleaner’, and this generally has been believed without in-depth scrutiny. As with tailpipe emissions, and as with battery-electric vehicles, the message must be that independent, real-world data is vital to inform the debate and policy formation, to ensure that consumers and the market are not led down another avenue that in practice makes air quality or carbon emissions worse, often fertilised by large amounts of taxpayer money.

Nevertheless, we acknowledge the uncertainties in the above analysis and potential future efficiency improvements. However, if these findings even broadly reflect the reality, they could lead to a rapid reassessment of the realistic potential and timing of fully automated driving for passenger vehicles.

As a first step, it would be helpful to move beyond a narrative that uses ‘autonomous’ and ‘low emission’ as almost interchangeably good things. They are not. They more likely trade off against one another.

The road to real-world deployment of autonomous vehicles

If all cars were electric, UK carbon emissions would drop by 12%