Leeds City Council has announced construction of the new Connecting Leeds schemes will begin this year, as it aims to transform travel both in the city centre and across the wider district.

Works will begin first on the Armley Gyratory, before focusing on roads around City Square, Leeds train station and along routes linking to the city centre. This will be the first phase to create a “world-class” public space and arrival gateway to the city centre for train, bus users, pedestrians, and cyclists, and will eventually see City Square closed to through traffic in readiness for the Year of Culture in 2023.

These are all part of a £100m highways works project designed to overturn historic barriers and issues developed from the ‘Leeds Motorway City’ of the 1970’s. The council said this created substantial ‘through traffic’ across the city centre, which has contributed to environmental issues and disconnected neighbourhoods – which can make it more difficult for people to travel on foot or cycling between different areas. 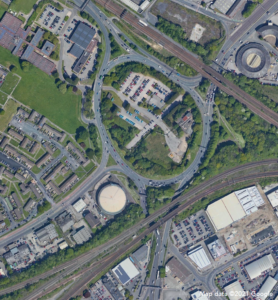 Current aerial view of Armley Gyratory, the plans include adding pedestrian routes and cycle crossings to this highway

The works will re-route traffic away from the city centre on to the more appropriate Inner Ring Road and the M621 orbital route following the closure of City Square, which also aims to enable public transport, walking, cycling and public realm plans to be realised in the city.

The works will be delivered at the same time as one another, and at pace to meet the deadlines of government funding. The council added its transport conversation findings in 2016 made it clear the public wished for improvements to be made as quickly as possible.

Furthermore, the majority of respondents to a Connecting Leeds study last year also supported the council’s transport strategy and ambition – to be a city where you don’t need a car.

Councillor Helen Hayden, executive member for infrastructure and climate, said: “Reallocating road space in favour of public transport, walking and cycling is a trend we are carrying out across our city, helping work towards the council’s vision of a city where you don’t need a car. We are working on greater and improved connectivity and with more appealing public space to make that vision a reality.

“The necessary works at Armley Gyratory and Regent Street flyover will move vehicles on to the inner ring road where they can travel more efficiently and, in the case of Armley, will be delivered alongside cycling and pedestrian improvements.

“I know these works cause disruption and I would like to thank the people of Leeds for their continued patience. We’re working as fast as we can to make these improvements, but please plan ahead and use public transport, walk or cycle if you are able as we continue to transform travel across your city.”