Transport for London (TfL) has revealed Santander Cycles hit record numbers in 2020 as it reached its 10th anniversary.

Figures released by TfL showed the total hire number increased by around 6,000 hires in 2020, to over 10 million.

Additionally, new 24-hour Santander Cycles membership registrations rose by 167% in the year to December, representing the largest increase in the scheme’s 10-year history.

According to TfL, despite an overall reduction in journeys across London during the pandemic, the scheme played a crucial role in keeping the UK capital moving as more people turned to cycling for both exercise and transport.

It added that record numbers of people tried Santander Cycles for the first time, with more than 60,000 hires made between 25-28 December 2020 alone due to people taking advantage of quieter streets and dry weather. 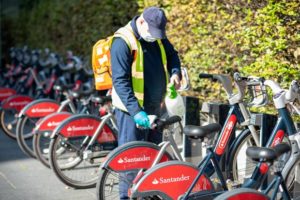 The scheme has also supported key workers during the pandemic by offering free cycle hire access codes to NHS staff and other key workers.

Will Norman, London’s walking and cycling commissioner, said: “The Santander Cycle Hire scheme has gone from strength to strength since it launched and over the past year many more Londoners have realised what a lifeline it is.

“Although I’m delighted that many records have been broken, I’m particularly proud that NHS staff and key workers have benefited from almost 220,000 free hires since March, helping support them in carrying out their critical roles.”

TfL said it will now aim to improve and modernise the Santander Cycles scheme to ensure it keeps pace with its growth. A planned modernisation programme will include an update to cycle hire terminals and back office systems.

The transport operator said the new initiatives will enable it to deliver greater flexibility for Santander Cycles users and allows the potential for e-bikes to be introduced in future.

A new GPS tracking capability to further help ensure bikes are always available to hire across the Santander Cycles fleet is also planned.