The first of a new phase of Char.gy charging points for EVs made by a Coventry-based manufacturer have been installed in the company’s home city.

Sarginsons, which is based in Coventry, traditionally supplies aluminium castings to a range of sectors including automotive and energy.

It has begun a process of diversification, which saw it become the sole supplier to EV charging point manufacturer Char.gy.

In the past two years, Char.gy has developed software and hardware, which allows charging points to be connected into existing on-street lampposts as well as standalone bollard options. 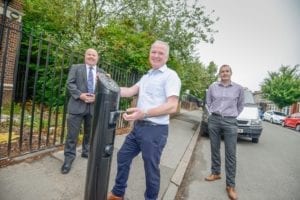 Both types of charging point can draw their electricity from the lampposts, removing the requirement for additional cabling infrastructure.

The technology means that vehicle owners in urban areas where only on-street parking is available can access charging points for their all-electric or hybrid vehicles.

The first 69 bollards made by Sarginsons have now been installed at locations across the city.

The bollards, designed by Char.gy and assisted by Sarginsons Technology Centre manager Gavin Shipley, were installed by contractor Sigma across a seven-day period and, over time, are expected to significantly increase the take-up of EVs.

Sarginsons produces the final built product for Char.gy including the aluminium castings as well as internal assembly, including the electronics.”

Cllr Jim O’Boyle, cabinet member for jobs and regeneration, Coventry City Council, said: “The new electric charging points are a crucial part of our work to improve the transport infrastructure in the city and to facilitate the use of electric vehicles in the months and years ahead.

“This has benefits for air quality, and addressing climate change, and I’m also pleased that Sarginsons – a highly skilled Coventry business – is manufacturing dozens of the charge points.”

Char.gy now has more than 400 installations across London, Coventry and Buckinghamshire.