First Glasgow has rolled out two all-electric buses to become the Scottish city’s first commercial bus operator to introduce such vehicles onto a commercial bus route since the 1960s.

The zero-emission buses are being funded as part of SP Energy Networks’ £20m Green Economy Fund, which supports Glasgow’s aim to become the UK’s first net zero emissions city by 2030.

The new vehicles, which are which are fitted with 330kWh lithium-ion batteries, will operate on the M3 route, which connects communities in Milton and Springburn with Stobhill Hospital and the city centre.

According to First Glasgow, every customer journey on the route will reportedly save around 2kg of CO2 compared with driving in an average car.

Built by Alexander Dennis at its Falkirk factory, the buses are equipped with mirrorless smartvision technology, which removes the need for wing mirrors, helps reduce blind spots for drivers and helps to reduce the effects of bad weather on their vision.

As part of the SP Energy Networks funding deal, First Glasgow will also introduce 22 EV charging points in its Glasgow Caledonia Depot, which will allow more electric buses to be introduced by First Glasgow into Glasgow’s transport network in the future. 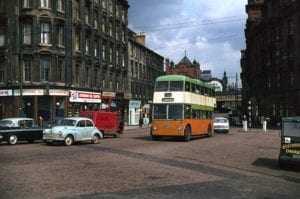 Glasgow’s trolley buses used electricity generated at the Pinkston power station, which was later sold to South of Scotland Electricity Board. The maintenance of the electrical supply system eventually became impractically expensive, leading to the subsequent decommissioning of the vehicles in May 1967

Andrew Jarvis, managing director for First Glasgow, said: “We are delighted to launch the city’s first conversion of a commercial bus service to fully electric operation.

“The whole team at First Glasgow is thrilled to be teamed up with SP Energy Networks in order to bring these state-of-the-art zero-emission vehicles to the people of Glasgow and the M3 route.

“As a business, one of our main goals is to make buses part of the solution when it comes to improving air quality in the city.

“By working with Glasgow City Council and Transport Scotland, we plan to make great strides forward in doing our bit to improve the city’s air quality and making Glasgow a cleaner and greener place to live and work.”

The launch of these vehicles represents the city’s first all-electric transport on commercial routes since electric trolley buses were decommissioned by the Glasgow Corporation in May 1967.