The latest EV charging point figures released by the UK government illustrate an uneven geographic distribution across the country.

Figures show that London has the highest number of public charging devices per 100,000 people, with Scotland above average and having the highest level of rapid device provision.

DfT chart – Public charging devices per 100,000 of population by UK country and region

A report by DevicePilot suggested this could be due to varying levels of investment across the country. Following a Freedom of Information request, DevicePilot found that 62% of councils in England received no government funding in 2020, whilst Scotland received only 6%.

According to the report, England secured close to £19m, of which more than £3.5m was allocated to London. Scotland was allocated £7m and Wales just over £2m.

DevicePilot said the figures for England were “skewed significantly due to it having by far the largest population and a fairer method of judging which locations and councils are best supported to calculate the level of government funding per capita”.

The study therefore calculated the spend for EV charging, with Scottish councils receiving £1.91 per capita and Wales £0.91 per capita. England received £0.45 per capita, which was less than a quarter of the Scottish amount. 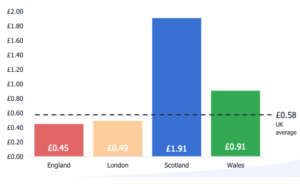 According to DevicePilot, the UK government needs to do more to support councils looking to install charging points.

Pilgrim Beart, Devicepilot chief executive, said: “Intervention and investment is sorely needed, yet many local authorities have no government funding for installing and maintaining charging points.

“Until these pain points are addressed, EVs will struggle to become mainstream, and the UK will not be considered a leading EV nation, which should be a high priority, long-term objective for any government.”