More visible and strategically placed parking spots for e-scooters are needed in order to reduce street clutter, according to the results of a trial conducted in Norway by micromobility operator Voi.

Two parking solutions were trialled in Oslo and Tronheim last summer by Voi in partnership with the Norwegian Institute for Transport Economics.

The results of the pilot project, which saw parking racks and painted parking spaces set up on public grounds in both cities, have now been published in a report, Parking solutions for shared e-scooters, and were shared in a webinar hosted by Voi earlier this week. 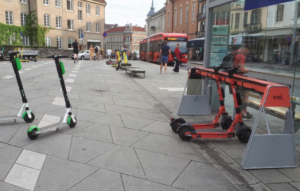 Using both GPS data and video footage, the project studied the effectiveness of both measures and showed that more than half of all people who parked in areas with racks or painted spaces parked their e-scooter either in or near to them.

It also highlighted that riders of non-Voi e-scooters chose not to use Voi-branded racks and instead left their e-scooter in other locations nearby.

According to the report, there is thus a clear relationship between the company the e-scooter is rented from and whether the user parks it in a rack. 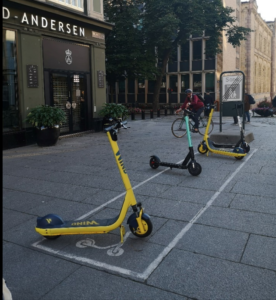 However, the report also found that there was no such effect when using unbranded painted parking zones in Trondheim, thus illustrating the importance of installing neutral parking measures.

Furthermore, it highlighted the impact of dedicated e-scooter parking spaces on street clutter. For example, following the implementation of painted parking spots in Trondheim, 86% of people surveyed said that e-scooters did not obstruct pavements.

The report concluded that while the pilot had had a “good effect”, further evaluations with different designs were needed to more accurately measure the overall success of e-scooter parking zones.

“The first is that people want to park responsibly when dedicated parking spots exist, and the second is that this solution only works if there are enough visible and strategically placed parking spots in areas where most people begin or end their e-scooter rides.”

Voi said it was now urging municipalities and authorities across Europe to dedicate more parking spaces and infrastructure for micromobility.

According to the company, the report indicates that it is possible to find a solution to street clutter while retaining a free-floating parking model for shared e-scooter services.