In December 2019, Transport for West Midlands (TfWM) opened the new Birmingham Westside Metro extension in central Birmingham. Running 840m (2,755ft) from Grand Central to the Library stop at Centenary Square, the route, which follows the Metro extension from St Chads to Grand Central, is the first in the UK to use battery power to run along a modern tramline specifically built without overhead wires.

It is a real first for the West Midlands and opens up new opportunities to deliver tram routes in areas that may otherwise have proven challenging for aesthetic and engineering reasons. The infrastructure was built by the Midland Metro Alliance, which planned, designed and delivered the route on behalf of TfWM, while the rolling stock was manufactured initially with passive provision for future battery installation (spaces left on the roof) and then retrofitted with battery technology from CAF. 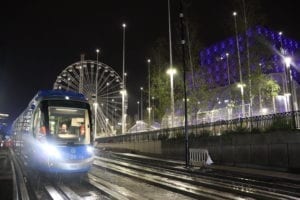 The service, which runs from Grand Central to Centenary Square, creates opportunities to deliver tram routes in areas that may prove challenging for aesthetic or engineering reasons

This catenary-free system not only offers multiple operational and commercial benefits but also marks a major step forward for light rail both in the West Midlands and across the country. In an urban environment such as Birmingham city centre the lack of overhead line equipment (OLE), such as poles and overhead wires, helps the system integrate itself into the urban realm. The city’s listed buildings and narrow streets meant that wall-mounted overhead line fixings could be avoided completely.

While there is an obvious cost saving that comes with a de-scope in the built infrastructure – both the initial install cost and the running maintenance/renewal cost, a positive health and safety effect is also tangible. Overhead lines on tramways run at 750DC and this electrical current in a city centre environment is undoubtedly a hazard for the public and workers, such as window cleaners, whose job it is to maintain the buildings.

In addition to this, one of the biggest health and safety risks when building in an urban environment is digging of the ground. Installing OLE requires an extensive amount of piling and breaking ground. The elimination of overhead lines completely removes this part of the digging works.

With this system and rolling stock modification being the first of its kind there was much to learn in terms of best practice and knowledge of issues that would be encountered along the way. Initially, one tram was transported to CAF’s base in Spain to have two 39.6kWh lithium-ion batteries retrofitted to the previously catenary-only operational tram. The tram was tested rigorously in Spain before being transported back to the West Midlands, running for 29.1km (18 miles) on its first test run on a single charge.

Once the tracks and accompanying infrastructure for the new extension were built the battery powered tram was tested on its new route. Pinfold Street, which previously existed with a 12% incline, was lowered to 8.8% to allow the tram to pass without being too onerous on the battery. The first 320m (1,050ft) of the extension was built on ‘floating track slab’, which minimises the amount of vibration and noise that dissipates into the footings of the surrounding buildings. Given the sensitive nature of the listed buildings in the area (the Town Hall, Victoria Square House and Birmingham City Council House) this was particularly necessary.

One of the key benefits that has yet to be realised is the ability to use a catenary-free system in low vertical clearance locations, thus in some cases mitigating the requirement to raise and reconstruct overbridges. This will be evident at Five Ways underpass in Birmingham and potentially for numerous structures on the Wednesbury to Brierley Hill Metro extension that for the majority runs along a disused railway line. The commercial benefits of not having to alter an existing structure are obvious and potentially significant, as is the avoidance of the inconvenience of having to close roads or footpaths above the structure, whilst it is reconstructed, to allow for sufficient clearance for catenary. 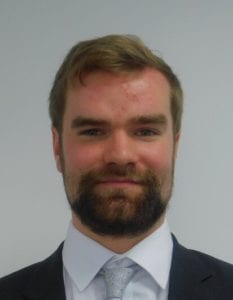 Perhaps one of the most challenging issues in the light rail (embedded rail) world over the past couple of years has been stray current dissipating from the rail into the surrounding earth and corroding alien metals in the surrounding ground (building footings, utilities etc). This occurs because of the electrical loop that takes place when the pantograph picks up the current from the OLE, passes into the tram and then the rail acts as the return. As it returns through the rail, the current will earth if not properly insulated. This can lead to serious third-party maintenance issues and can be costly to local authorities and construction contractors alike. The removal of the catenary, whilst it does not totally eliminate this stray current issue, does reduce it to much lower and more acceptable levels.

The benefits of going catenary-free are obvious for all to see and most importantly provides significant benefits for the end user, not only in terms of the travelling passenger but also members of the public passing through/working in the urban environment. There is no doubt the future of the light rail world is catenary-free. As battery technology progresses these benefits will be exaggerated and the cost saving could encourage local authorities to look more closely at what was previously viewed as a very expensive transport mode.