The City of Edinburgh Council has unveiled the final plans for its George Street transformation works, which would largely remove traffic in favour of active travel options.

Detailed in an artist’s impressions and a 3D fly-through video (see above), the street would feature a cycling thoroughfare and widened pavements to create a people-friendly setting.

Lesley Macinnes, transport and environment convener, City of Edinburgh Council, said: “These animated concept designs offer an exciting glimpse into what George Street and the surrounding area could look like in 2025 – a welcoming, relaxing and unique space, where people will want to spend time, to visit local shops, cafes and restaurants and to travel to and through the city centre.

“This vision has been years in the making and follows significant engagement with the public and a range of groups representing different interests.

“It’s essential that its design works for everyone, which is why we’ve spent time ensuring it meets people’s access needs, that it allows residents to go about their daily lives and that it will encourage local businesses to flourish, particularly as we look to make a strong, green recovery from the Covid crisis.” 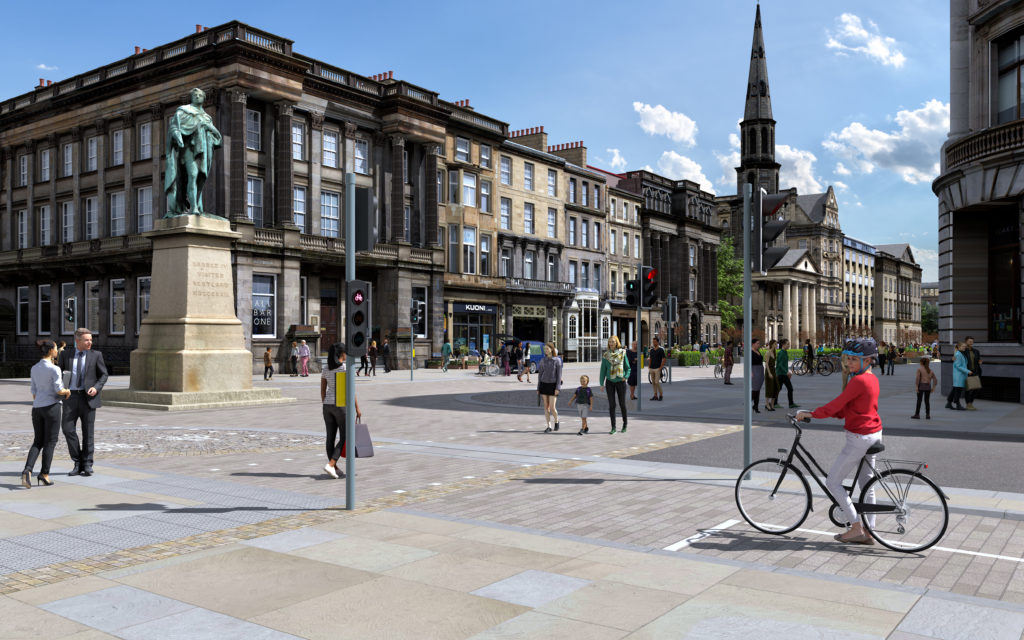 Junctions will be improved to put cyclists and pedestrians first

Under the plans, bus and tram stops on adjoining streets would enable visitors to access the historic street by public transport, with limited blue badge parking bays available at key junctions.

Furthermore, the vision for George Street also includes charging hubs for e-bikes, with the layout designed to connect to cycling routes across the city. This includes the forthcoming Meadows to George Street and City Centre West to East Link schemes.

The improvements works are part of a wider coordinated package of projects under Edinburgh City Centre Transformation. These schemes also support the City Mobility Plan – a 10-year plan to deliver a better connected, net zero carbon transport system and a healthier environment in the Scottish capital.

During February and March, the council will consult with key groups and the public on the proposed design. Feedback gathered during these months will inform a final iteration of the design proposal before being brought to the council’s transport and environment committee in April.

If approved, construction work would begin in the summer with anticipated completion by 2025. It is expected to cost £32m, with £20m from Transport Scotland via Sustrans.