The M6toll provides an annual £400m boost to the West Midlands economy through its role as a national corridor, according to an independent report commissioned to look at the economic impact of the road.

The report, titled ‘M6toll: a regional and national economic catalyst’, was carried out by consultancy Vivid Economics and utilised existing UK government-approved data, including figures from National Highways, the Department for Transport and Land Registry, to assess the contribution of the M6toll to the regional economy and the wider national road network.

Read more: Why road pricing is the solution to keep Britain moving

The Vivid Economics study also calculates that the M6toll has helped boost wages by 1.4% – equivalent to approximately £280m in additional total wages per year for the region. Furthermore, assuming a median UK income of £29,000, the additional 5,000 jobs has resulted in £140m a year in additional salaries.

When assessing the M6toll’s contribution to national infrastructure, the study found that, in providing a free flowing route, the M6toll encourages the switching of through traffic to the tolled solution – reportedly saving business and individual customers three million hours a year.

The study also highlights the importance of the M6toll as a critical artery for effective movements through the region, offering a reliable and congestion-free route – moving up to 85% of journeys travelling through the M6 corridor and helping free up capacity for local journeys.

Andy Cliffe, chief executive of M6toll, said: “While we welcome these findings, we will not use them as a reason to rest on our laurels or put the brakes on our ambitions. By delivering strategic initiatives such as our Road Ahead programme, we continue to move forward in providing a reliable and effective alternative route through the congested West Midlands and improving the UK’s connectivity.”

The M6toll is responsible for 15-18 million journeys per year that otherwise would be on the M6 or other local roads. Midland Expressway, which operates the M6toll, said it is seeking to encourage more people to use the road for local and regional journeys through the development of various initiatives, offers and saver products. 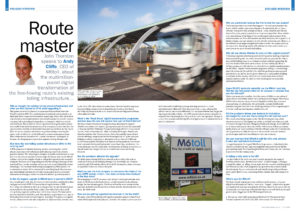