Drivers in Miami-Dade County, Florida could be about spend 15% less time sitting in traffic after Siemens Mobility was awarded a US$150m (£118m) contract to provide an advanced traffic management system (ATMS), which will upgrade 2,900 intersections and traffic corridors.

All intersection hardware and software technology will be connected to an integrated traffic management platform that will perform intelligent analytics, implement strategic measures and optimise travel times across the county.

This system will dynamically change traffic patterns in real-time at traffic lights linking a network of roadway corridors to provide better movement of traffic based on actual traffic demand.

Data will be collected in real-time from a wide array of new sources at intersections and roadway zones/corridors, which will then optimise the signal timings at each intersection in a network.

According to Siemens, this will create an integrated system designed to quickly and efficiently counteract impending critical situations, as well as unpredictable traffic overloads and congestion. 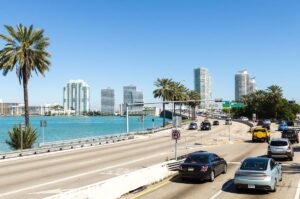 “We are proud to have been chosen to provide this vital traffic improvement project for Miami-Dade County and look forward to implementing an intelligent system that optimises and integrates traffic operations throughout the county,” said Marcus Welz, CEO of Siemens Mobility’s Intelligent Traffic Systems for North America.

According to Siemens, the fusion of data between the systems will enable a more robust traffic control network.

This will allow for operational adjustments to be sent to SCOOT for real-time implementation at the intersection, which will reportedly ensure public transit vehicles are kept on schedule and pedestrian safety is maximised.

The services and technologies Siemens Mobility plans to use in Miami-Dade have been used for traffic systems upgrade projects in over 300 cities, including recent ATMS projects in Seattle, Delaware, London, and Bogota.

Siemens Mobility plans to open a Miami-Dade operations facility and will partner with local small business subcontractors to help facilitate this work.

The Miami-Dade project further expands the Siemens footprint in Florida, where there are already 5,200 employees in the state, with nearly 300 working in Miami.